dragn - This is a recipe I've made many times: https://www.kimlivlife.com/2011/04/snicker-poodles.html

Snicker Poodles! LOL. You probably have everything you need...save maybe the bone shaped cookie cutter. Order one or use another. Or just cut and then back them. I think the doggie will love them and there's all good stuff in them.

I can look for other recipes? I have the doggie cake recipes that are more "meat" than cake and others too. I have a lot of doggie friends that cook for their dogs as much as for themselves! Shhhh!

Goodness.... don't go to a lot of trouble! Like this dog is not spoiled at all! Duhhh... I probably spoiled her more than her mistress. Loved doing it - drove my friend crazy... LOL

As simple as can be.. please. Next two weeks are crazy for me and then I only have barely a week before I go up there.

OK. just looked at Snicker Doodles - works for me! I'll make them small and medium. One for treats and maybe one for training.

Ginny, puppy Stanley was SO tiny! Such good looking dogs.


Kaneohegirlinaz said:
Mrs. Next Door Neighbor asked if she could pay me to bake a birthday cake for her Mister

It'll be my gift to him. Fresh Seedless Raspberry filling that is...
Click to expand...

K-Girl, I'm glad you identified that. When I first saw the image on my phone, I thought it was ketchup or "chili sauce".

What a lucky neighbor you have!

Here's that rye bread I baked on the grill, since I was heating it up for something else to start with: 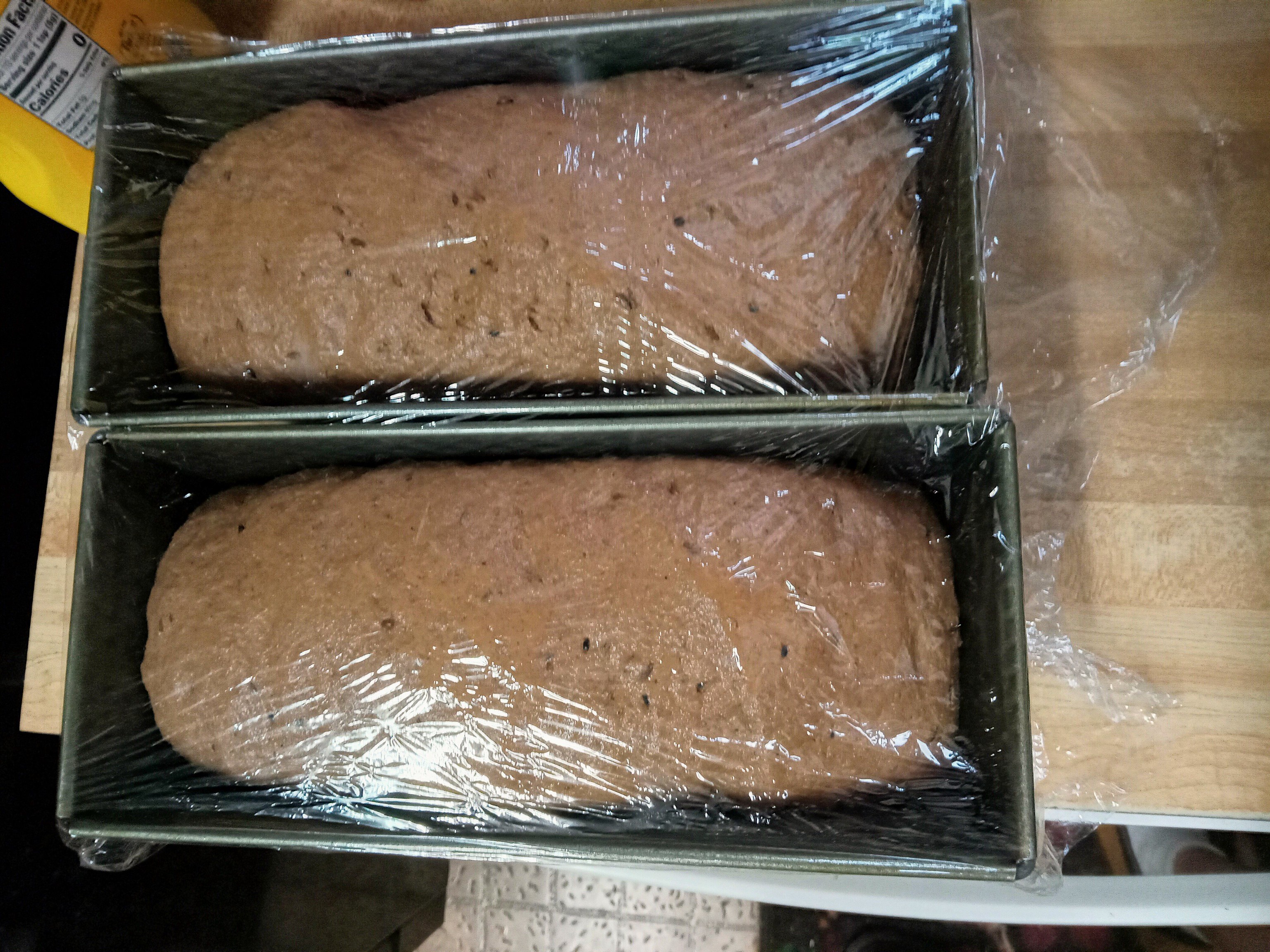 Rye bread, about 3/4 risen, to be baked on grill. by pepperhead212, on Flickr 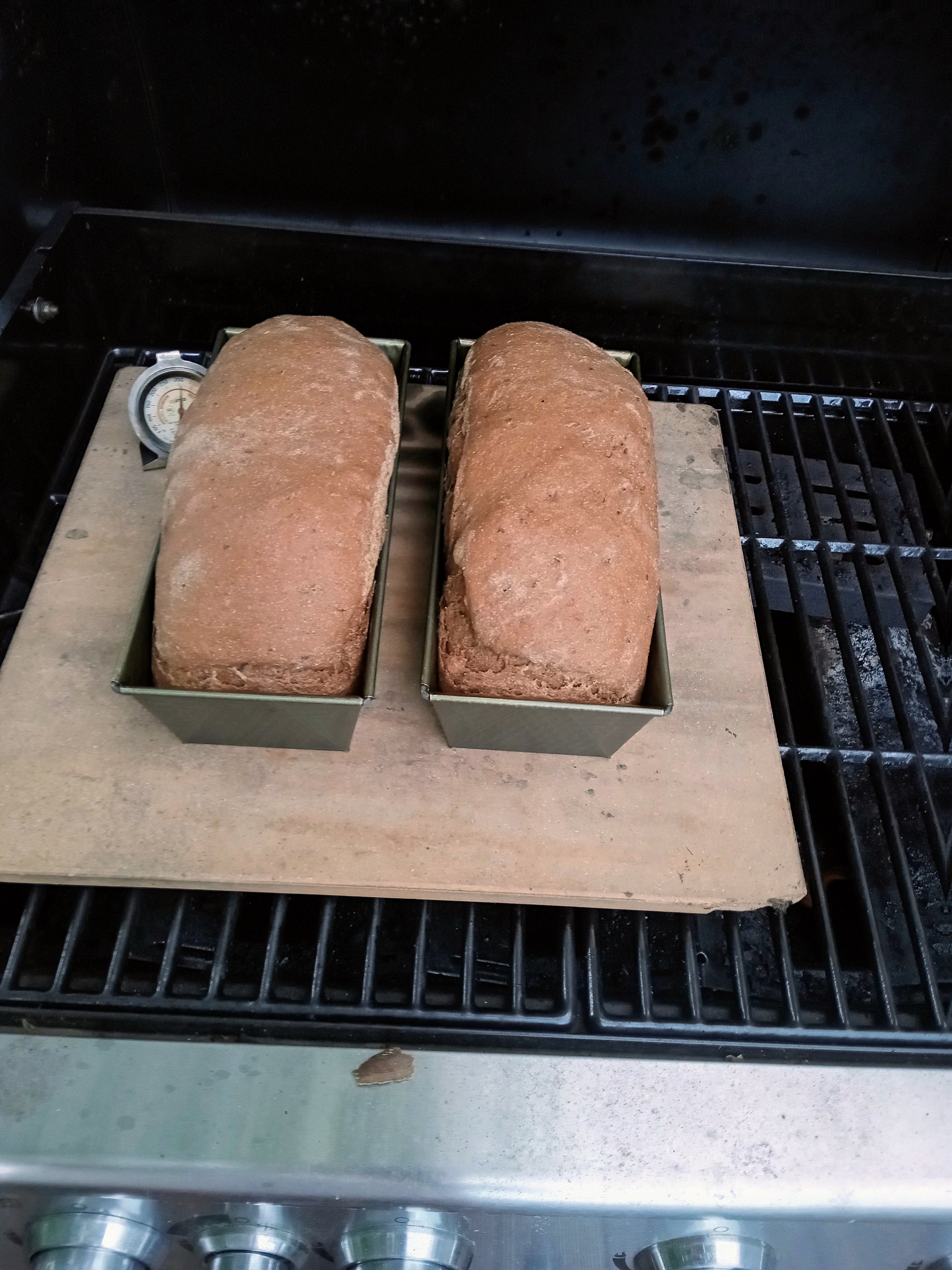 Rye half baked, getting ready to switch them. by pepperhead212, on Flickr 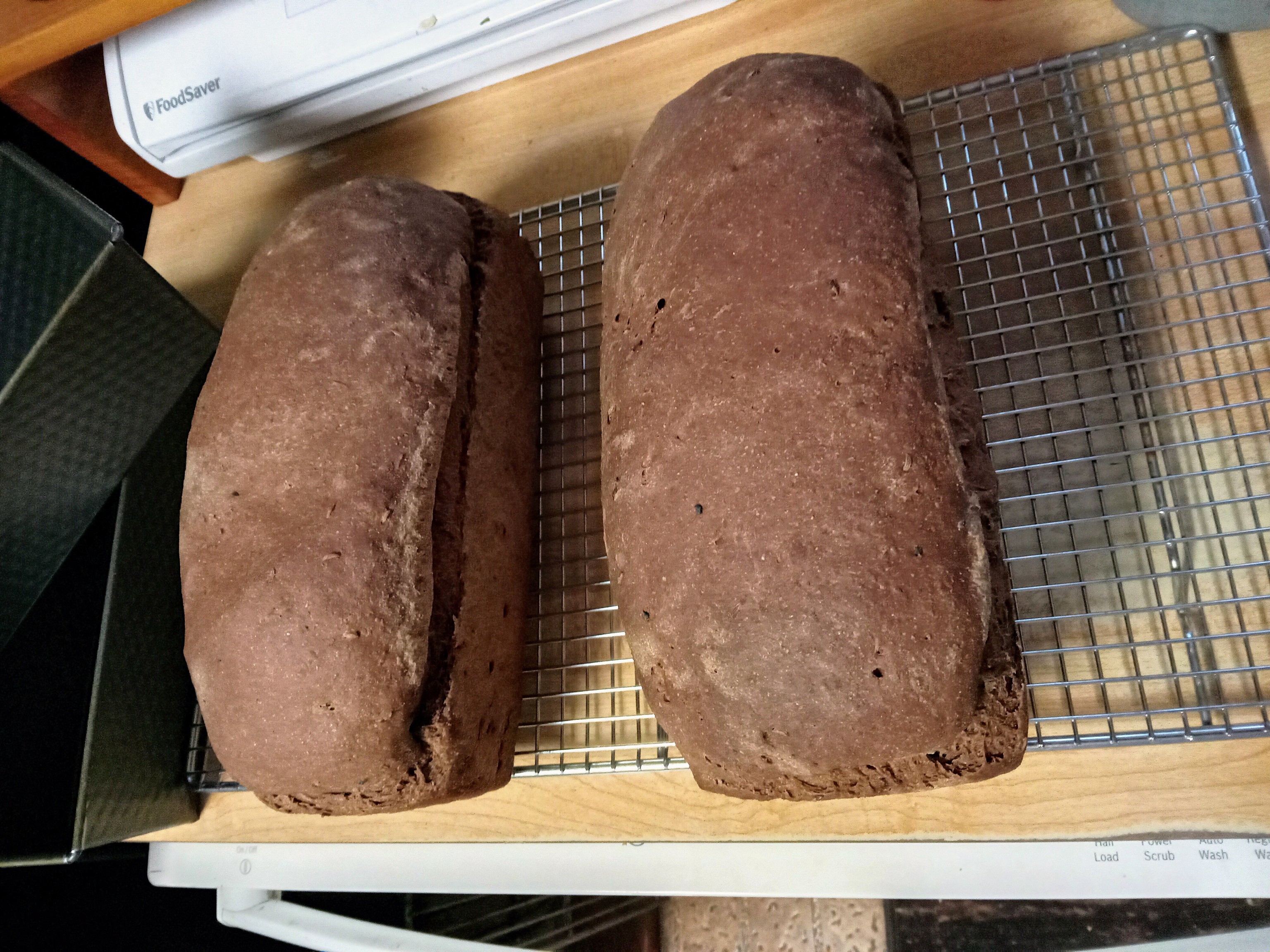 Rye bread baked in grill. by pepperhead212, on Flickr

That bread was baked in your grill, pepper? Those look great!

My little toaster oven has been busy this week. On Sunday, I made a recipe from a library book I borrowed, "Snacking Cakes". While the recipe was called "Nectarine and Cornmeal Upside-Down Cake", it did say that peaches could be used but their skins would be tougher. Not if you peel them! Himself wasn't thrilled with the texture from the cornmeal. While the cake tested fully cooked, the middle seemed too moist. I think I put too many peach slices in the pan - they were very juicy.

On Monday, I sacrificed my last box of Aldi double chocolate muffin mix. They aren't carrying it at the present time, and I think I know why. Every time I made these in the past, they were great. This batch was a bit flat and heavy. Still edible, but not the usual. Maybe they're looking for a new supplier.

With yesterday's disappointing results, I just had to bake another batch of muffins, this time from scratch. Aunt Maude and her blueberry muffin recipe to the rescue! Once again, these were wonderful. 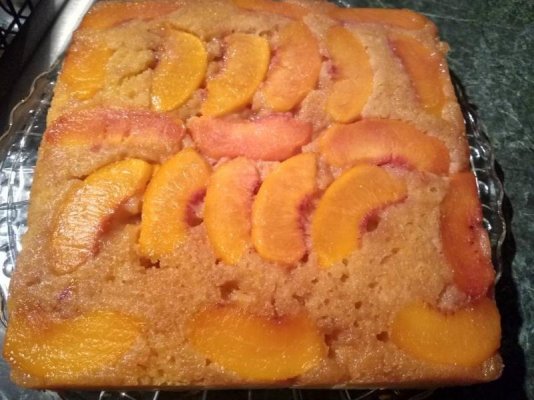 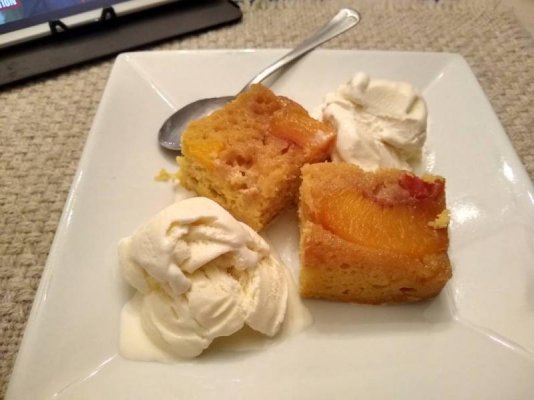 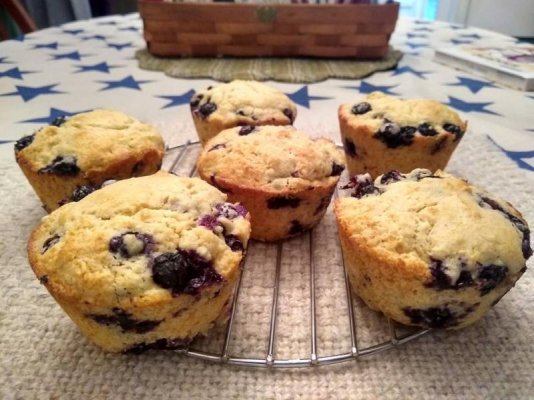 Someone on another forum got me thinking about that butternut flour, so I looked up a recipe that I had made with it before, that called for 15 oz of canned pumpkin. Here it is. I didn't make the frosting, but I have made something like that before, with a cream cheese, that was delicious. I didn't mind baking something, since I had turned that AC off!
https://www.straightupfood.com/blog/2012/10/28/pumpkin-pie-squares/

You can see the butternut paste - I made it with 1.25 oz of flour, with water stirred in to make 16 oz, and that made it very thick. Actually, the texture is more like a pie, than a cake. 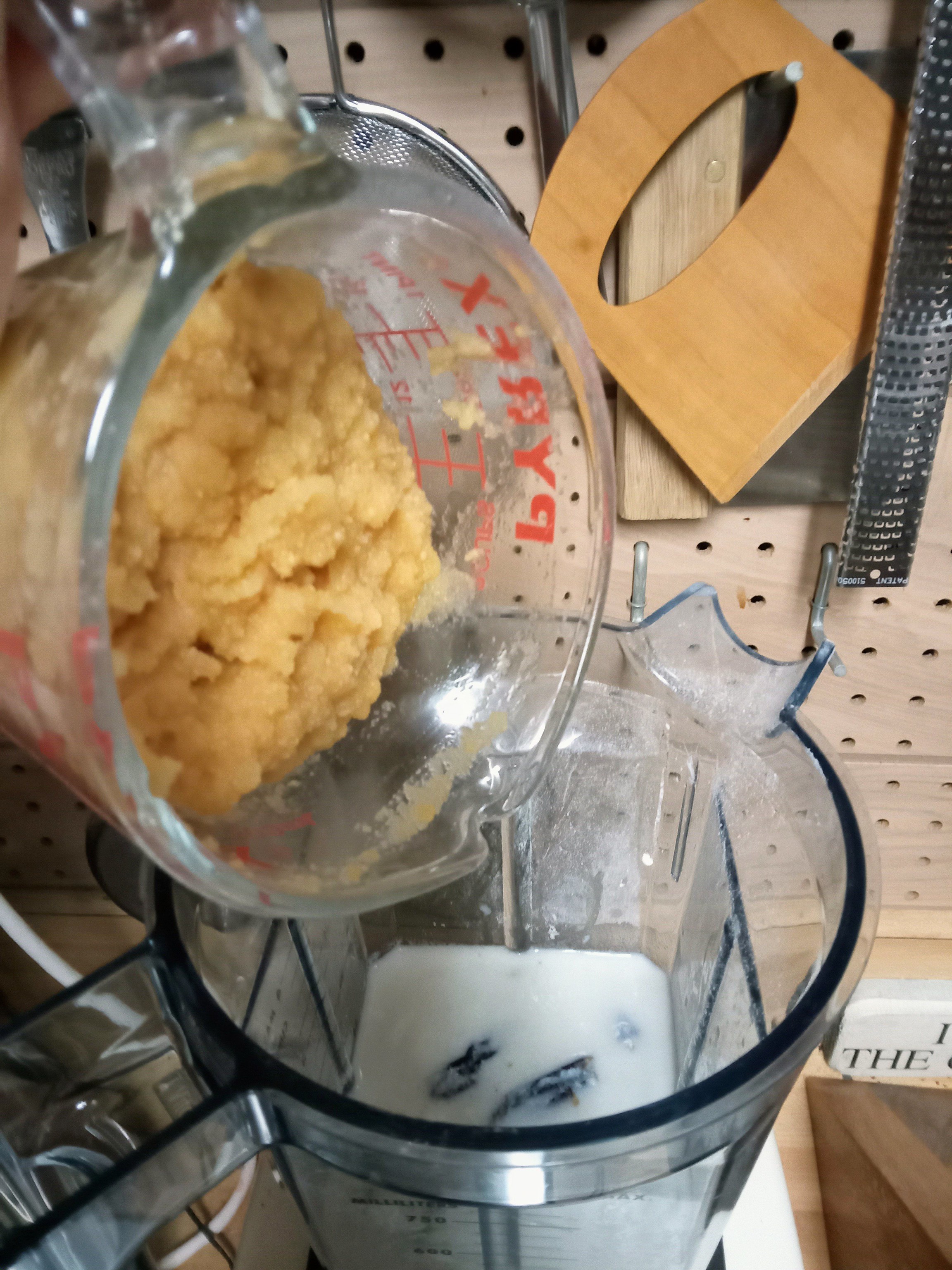 Butternut flour/water paste, added to a variation on pumpkin cake. by pepperhead212, on Flickr 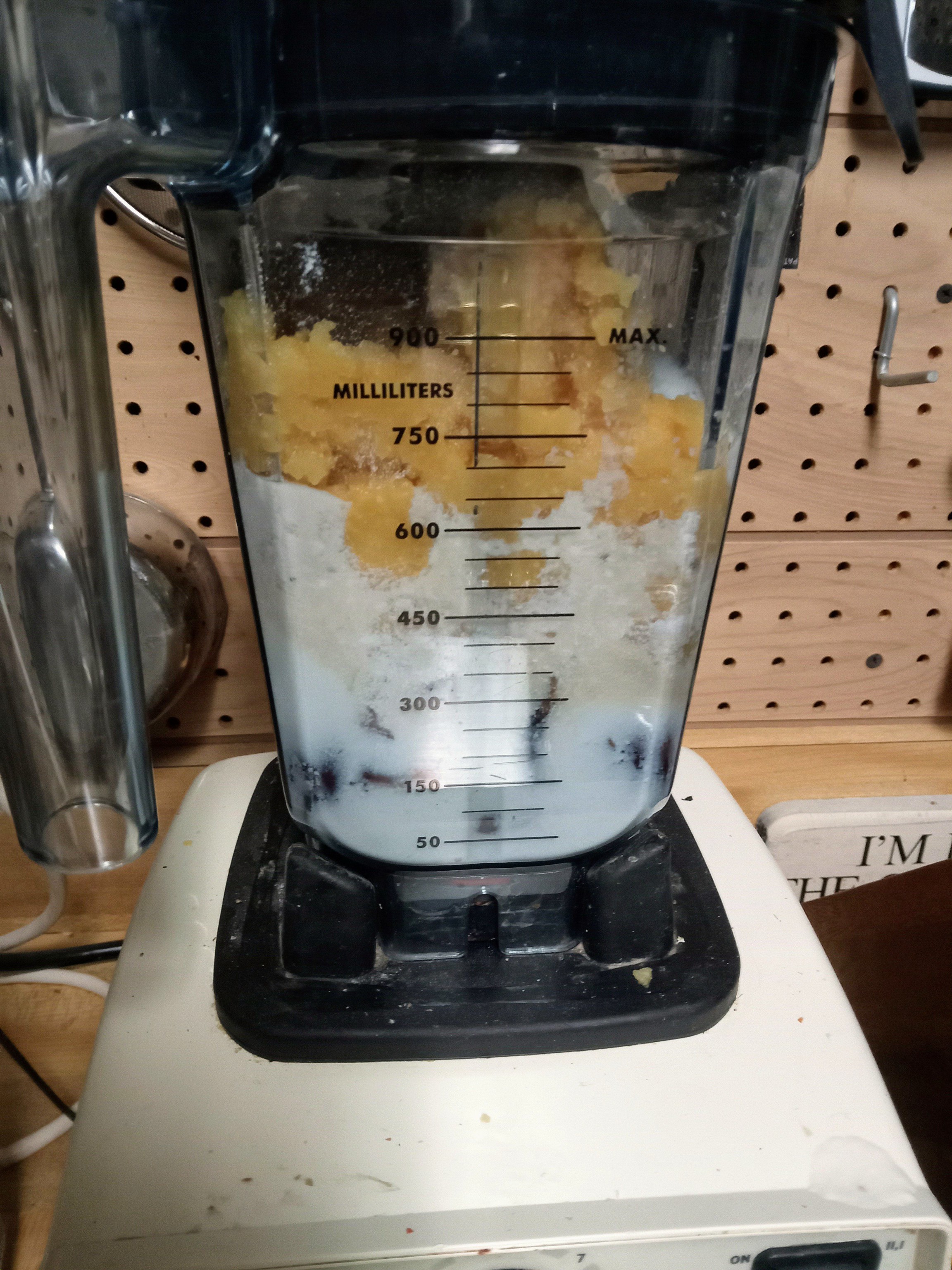 Butternut flour cake, ready to blend, before blending, and mixing with oat flour and spices. by pepperhead212, on Flickr 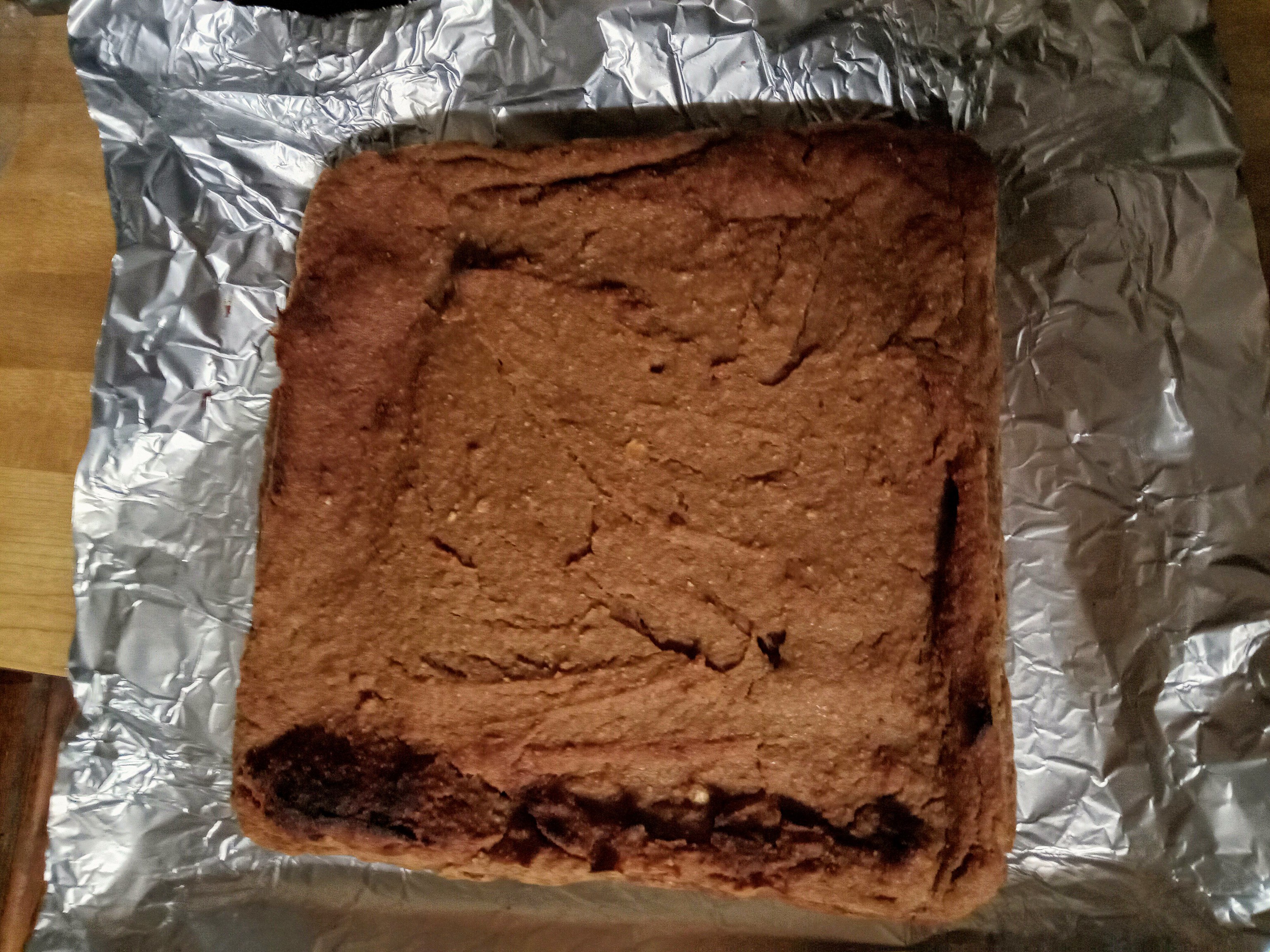 Since my husband has changed from eating crackers and cheese for lunch and has gone to deli meat sandwiches, I'm going to make 2 loaves of bread today to feed his habit.

Love making bread, especially since the bread machine can do the kneading. My arthritic hands can no longer do it.

There is no better thing to do with blueberries in this world than to make a pie. 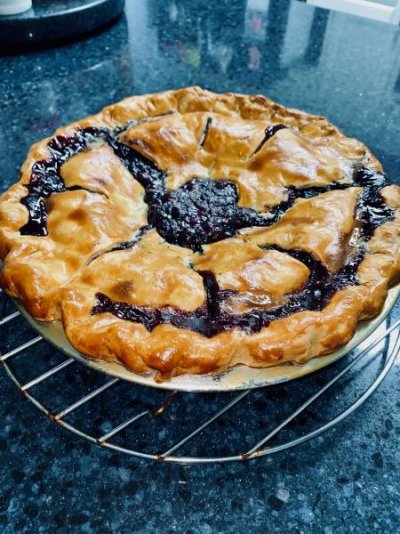 I made a rye bread yesterday, that started out as bread sticks, but ended up as a larger piece of dough, so I made it into a loaf!

I started by putting some mashed potatoes (actually flakes, made into mashed - the only thing I use this for), but had to many for the amount I usually make (around 32 oz, or slightly less) for 8 bread sticks, to go on one sheet in the convection oven. Since I like potato in breads, I just had the idea to put some in these, but I should have weighed the potato, before and after adding the water, so I knew how much I had! Anyway, I ended up with a 41+oz piece of dough, so I ended up making a large loaf, in the clay pot shown here. It only has, in addition to the generous cup of potato, 1/4 c water + 1 tb yeast, 1 c WW flour, plus 1/3 c gluten, and the rest of the flour is rye (about 3 c). Not as much molasses as usual, so it's lighter, and a half tb salt, and the usual caraway, and a little nigella. I rose it twice, since it didn't get that usual preferment that I use for bread.

This bread was very much like an early favorite rye bread of mine - a potato rye with a cup of potato to 2 c ww and 4 c rye. The essential wheat gluten in this made it rise more, however.

I usually don't bake just one loaf, but this came at the right time, as my weather is getting hot again, so I don't want to heat things up again! 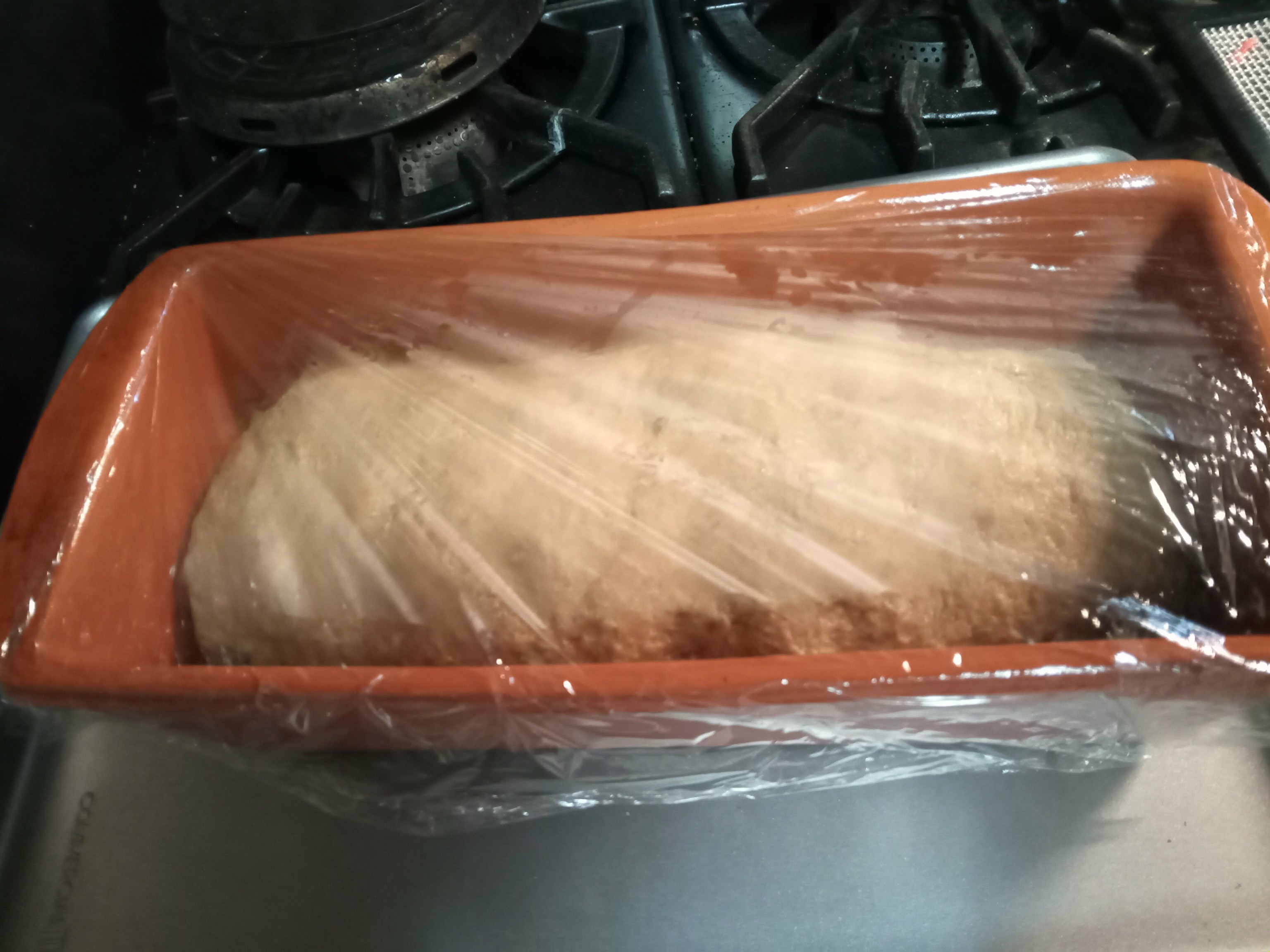 A large loaf of potato rye bread. by pepperhead212, on Flickr Baked loaf of potato rye bread, about 41 oz by pepperhead212, on Flickr

Getting started baking for our Community's Craft & Bake Sale next month 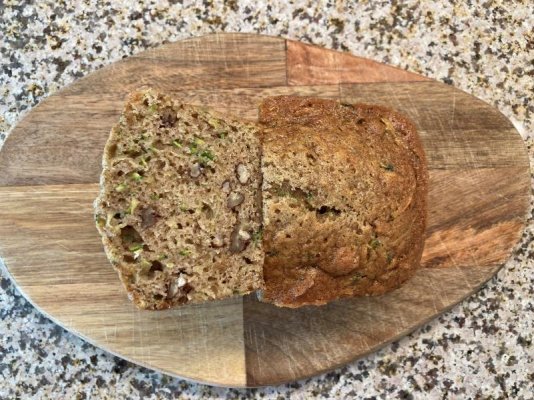 Something new, Zucchini Bread ... meh, it could have baked like 2 minutes longer but DH said I'm my worst critic, "It's delicious!"

I'm only going to make 2 batches, it makes 7 Mini Loaves per recipe ... we had to try one, ya know, for quality control and then I'll offer samples of this as well as my usual Rum and Kahlua Bundt Cakes.
I've been told time and time again, giving out samples in paper Dixie Cups is the best advertisement and sells cakes!

Since my grandson was here for the all appetizer dinner, I had to make this for dessert. After all, he says it's the best thing he's ever eaten in his life. 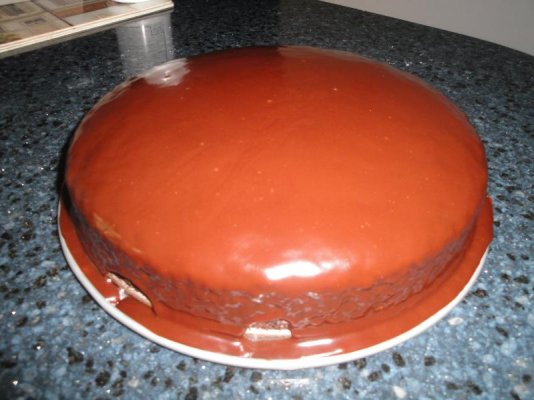 I have, accidentally, some overripe bananas. I foresee some banana nut muffins in the very near future.

I don't share enough of my photos anymore. It's a bit more trouble since they reside on a cloud instead of my device. But I stumbled on this from a dinner party and thought I'd share.

Tonight is Neighborhood Gal Pal's Bingo Night Out
We have linner (late lunch/early dinner) and then go to play Bingo at the Community next to ours, loads of fun!

I've fallen into the habit of taking a baked good to donate.
At intermission, the Community offers desserts for sale to help fund their cause.
I made my deluxe Brownies this go around. 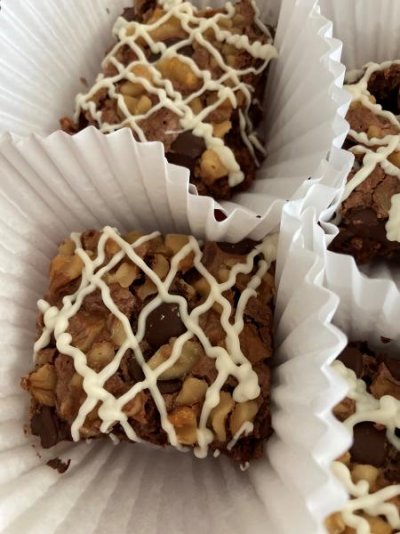 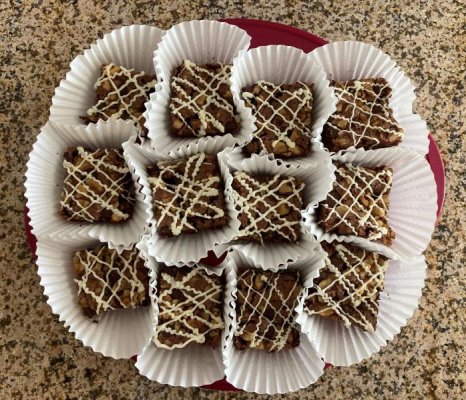 Hershey's Best Brownie recipe with a teaspoon of Espresso powder combined in and Chocolate Chips and Walnuts pressed into the top of the batter. I like to embellish them once they're cooled and cut with a drizzle of Vanilla Candy Melts. 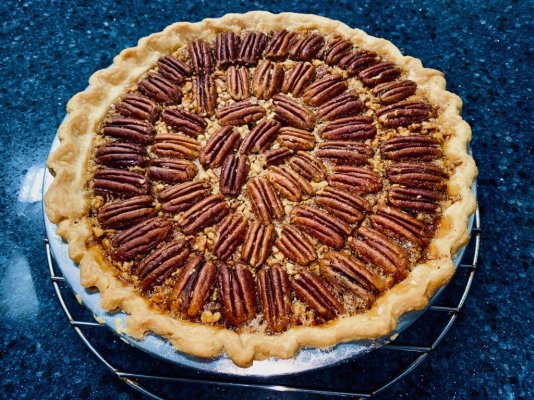 That pie is a thing of beauty.
Click to expand...

Today I made another batch of that potato rye, since it was quite cold and I just wanted to bake something. I only baked one large loaf, like last time. 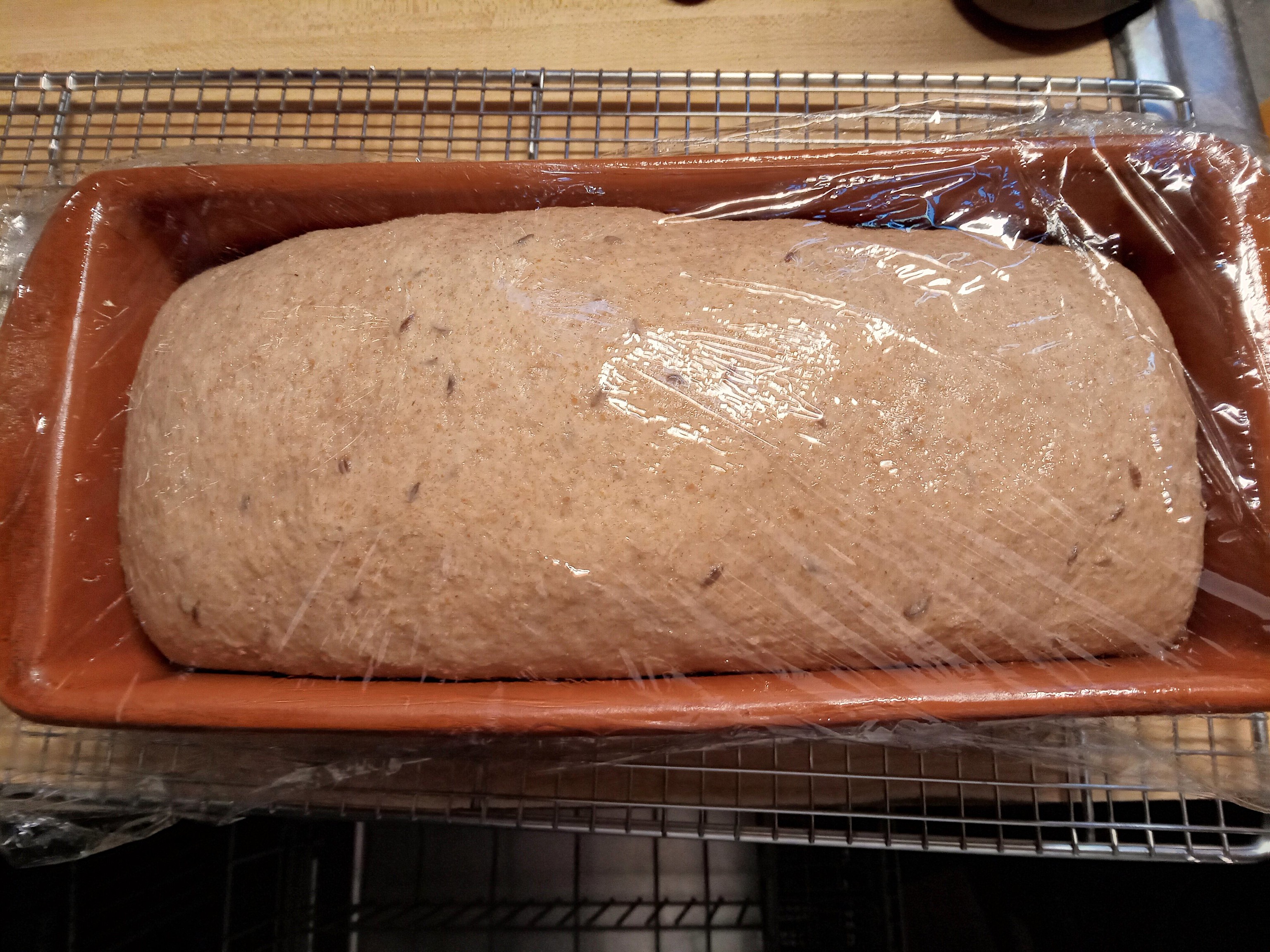 Potato rye, almost ready to bake. by pepperhead212, on Flickr 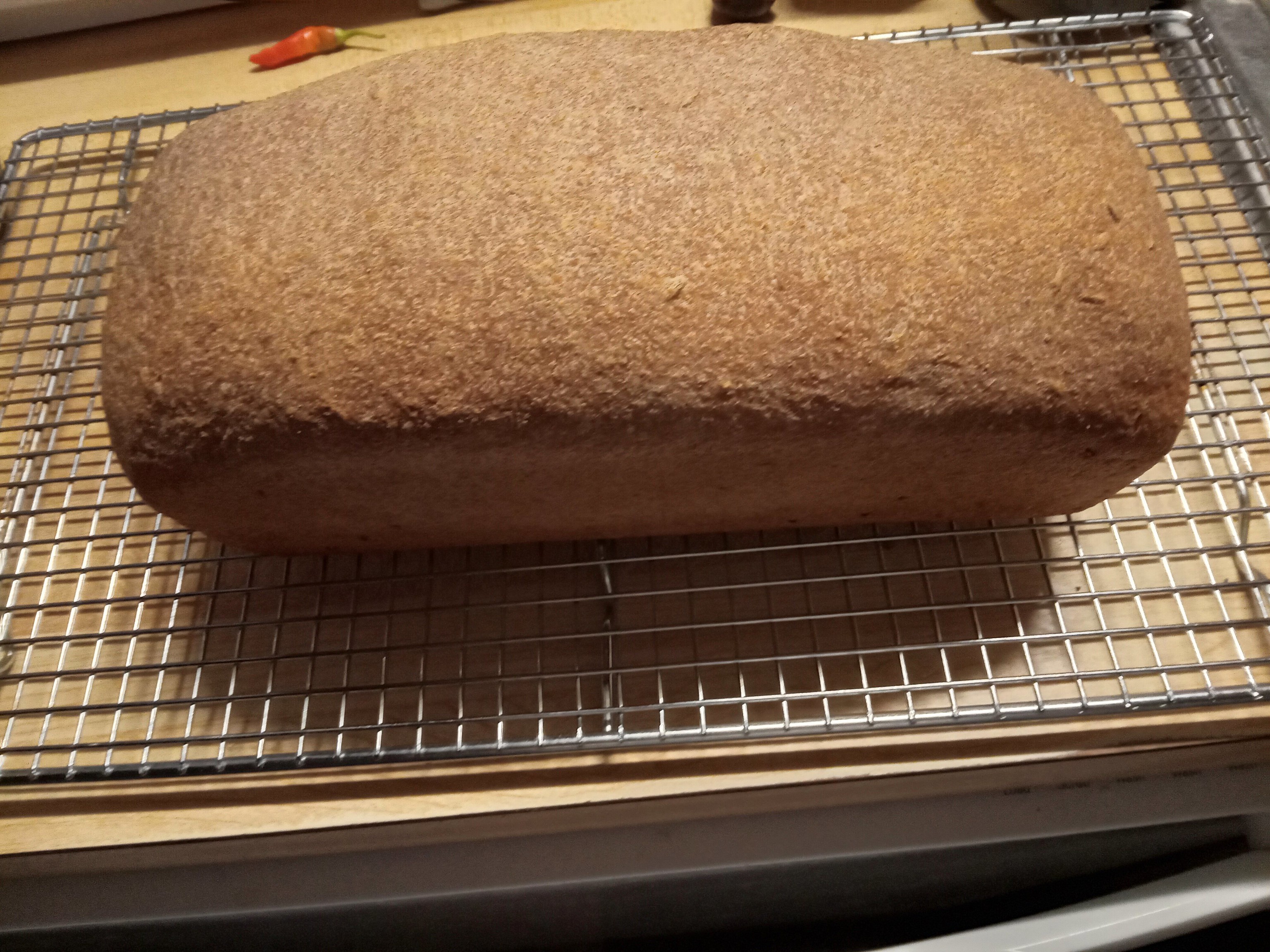 I baked another, smaller 2 lb loaf today. I was too lazy to grind another batch of rye flour, so I made a loaf of WW oat bran, which I started last night with a soaker, and a biga, and finished it when I came in today. I still put some caraway and nigella seeds in it, like I do with rye breads. 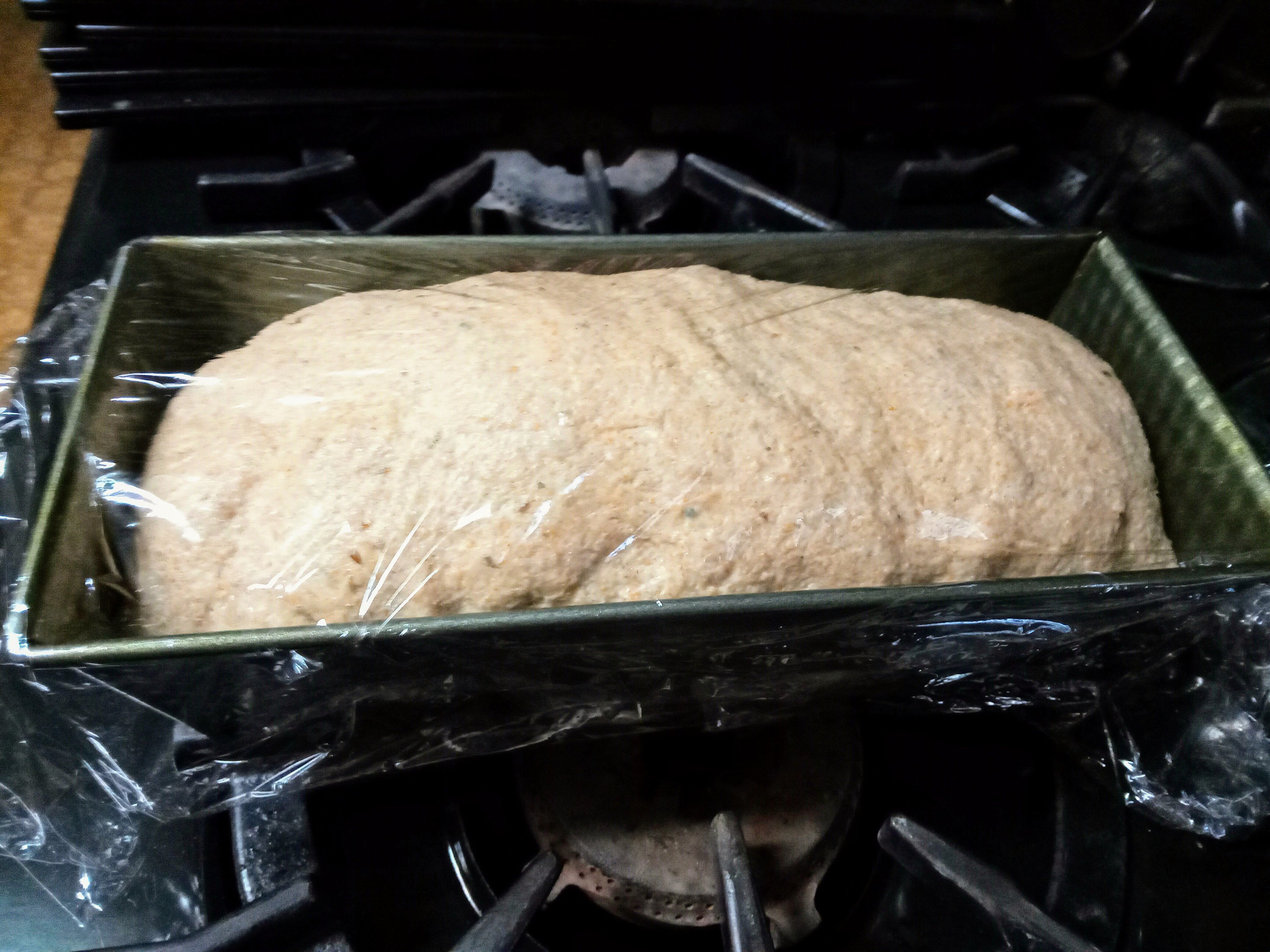 WW oat bran sandwich bread, a little before putting in oven. by pepperhead212, on Flickr pepper, you bake so much bread! I'm envlous, not only of your ability but the shear quantity you make. Where does all that bread go!??
You must log in or register to reply here.