This is one of our favorite snacks, especially in the summer. I toasted slices of baguette and made a topping with tomato, shallot, garlic, basil, olive oil, red wine vinegar, salt and pepper. It's topped with fresh mozzarella and broiled to melt the cheese. 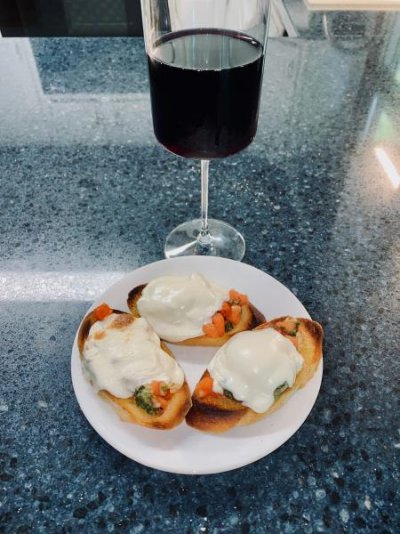 That sounds yummy. You put the garlic in the topping? Do you abrade any of it onto the bread? As I understand it, the word "bruschetta" is onomatopoetic with the sound of abrading the garlic on the bread. And that onomatopoeia only works with the "k" sound.

I used to toast the bread slices then rub a whole clove of garlic on them. It works either way.

Just because everyone should know: Bruschetta was the Greek method for testing the quality of first pressed Olive Oil. They would take a crust French bread shaped lof (like a very large hoagie bun), slice it in half lengthwise, brush the soft part with the olive oil, toast it over fire, the rub it with raw garlic. We can thank British wealthy for adding toppings. They began eating Bruschetta as a status symbol, as the regular masses couldn't afford the EVOO. Then, they started adding toppings, i.e. tomato, peppers, cheese, etc.

I don't mind toppings on bruschetta. But please, don't make a topping, put it in a jar, and call it bruschetta. I've seen jars of various veggie mixes in stores, in jars, labeled bruschetta

. It kind of drives me crazy.

Sorry to rant about this. My brain just wouldn't stop until I posted something

Oh, and lest I forget, Andy, your toppings look great

Chief there’s something seriously wrong with your story. I use EVOO and toppings and don’t qualify as wealthy. Not even close.

A few years ago I went to an Italian cooking demo at a Food and Wine Festival. The Chef/ Owner of the restaurant was doing the demo, and he basically made it quite clear that I should be pronounced with the "k" and not the "sh'. Almost to the point where he seemed pretty angry when people mispronounced it.

Looks great Andy, and with tomatoes in season it's the perfect time of the year.
M

However you pronounce it, bruschetta is delicious, and is one of those things you can play around with and make different versions. I make it frequently, and we always enjoy it. Tomatoes, garlic, chopped onion, basil, oregano--basically anything you want to use. Sometimes I even put grated parmesan romano on top.

This, and a green salad makes a great light supper!

Another way that I've seen bruschetta made is toast the bread, rub the still warm bread with a cut Garlic clove and follow that with taking a cut tomato and rubbing the toast with that. Top all of the above with freshly ground black pepper, a fresh basil leaf and some grated Parmesan Cheese.

Brew-sketa is how my in-laws pronounce it.
M

Kaneohegirlinaz, that sounds delicious, and I'll give it a try tomorrow! Thanks for the great idea/recipe.

This is how I like to make bruschetta: Toasted baguette slices spread with homemade basil pesto, topped with diced tomatoes and sprinkled with Parmigiano Reggiano cheese. So good [emoji39]

GotGarlic said:
This is how I like to make bruschetta: Toasted baguette slices spread with homemade basil pesto, topped with diced tomatoes and sprinkled with Parmigiano Reggiano cheese. So good [emoji39] View attachment 52956
Click to expand...

Got any leftovers?
I

Andy M. said:
This is one of our favorite snacks, especially in the summer. I toasted slices of baguette and made a topping with tomato, shallot, garlic, basil, olive oil, red wine vinegar, salt and pepper. It's topped with fresh mozzarella and broiled to melt the cheese.

The “ch” should be pronounced like a “k” and not an “sh” so you got it right. The Italian chef that I worked under would slap the back of your head if you mispronounced it lol.

Love the toppings. The addition of the red wine vinegar really turns the flavor profile towards the direction of a panzanella, which is pretty much one of the greatest salads in the history of mankind lol
I

Is Bruschetta an appetizer?

cookiecrafter said:
Is Bruschetta an appetizer?
Click to expand...

I think it is, typically. However, the last time I made it, it ended up being our dinner. (I made a LOT!)

We usually have it as a late night snack. But, yes, I think it is usually an appetizer.
L

Wow! That looks delicious! I will definitely try this next time I get groceries. Adding baguettes to the shopping list!
You must log in or register to reply here.

Chief's Best BLT, And a Kosher sub for Carlie D