Back in the day ( when I wasn't vegetarian ), my dad would make Manhattan clam chowder, usually on a rainy Sunday morning. He would gather all the ingredients , and let us ( me , my brother and my sister) cut up the veggies , while he opened the clams. He used a recipe out of a cookbook, with some of his modifications written in ( and some things crossed off. Fast forward, my parents have moved multiple times, and in the process many of his cookbooks were lost ( thrown out), including the one with the clam chowder recipe. Before everyone gets excited thinking I'm finally going back to meat, my brother called me the other day asking if I had the cookbook which contained this recipe. I told him I did not.

So the reason I am posting this, is because I have a decent memory ( when it comes to food and things I've eaten in the past)., and I'm going to describe everything I remember , hoping someone knows of a recipe that may be similar.

- He started by frying a few pieces of bacon in oil ( possibly butter ). I do not remember if they were cut up ( I assume they were ) or not.
- The veggies we cut up were Carrots, celery, potatoes ( he did the onions).
- I remember viewing the recipe once, and it called for green pepper, but he omitted that.
***He did add cut up okra to it, but that was not in the recipe***
- Definitely thyme, Definitely a bay leaf S&P
- Can of tomatoes along with broth ( likely a chicken broth)
- I dont know specifically what kind of clams he used or how many. They were definitely fresh, as he was would be opening them in the sink as we cut the veggies. It must have been at least a dozen, each about 2 - 3 inches in diameter.
- When the soup was finally done ( and he would let it cook for awhile), he would ladle out some of the soup with veggies, blend them up, then add it back to the soup to thicken it.

Thats all I got.

Im not looking for any clam chowder recipe, but for one that is as close to what I wrote above. If any one makes some thing similar , that would be great. I can at least get the proportions of ingredients and pass it on to my brother.

Some of the Cook books my dad had were Better homes and gardens, Julie Child, Jeff Smith, and many others that I dont remember . He made this soup about 40 - 50 years ago, just to give a time reference . Not that I expect anyone to know the exact recipe, but knowing around the time he made give some hints or direction.

My BH&G Cookbool is about 50 years old. Here is their recipe for Manhattan Clam Chowder. It sounds a lot like what you posted. Here's a photo of the recipe. 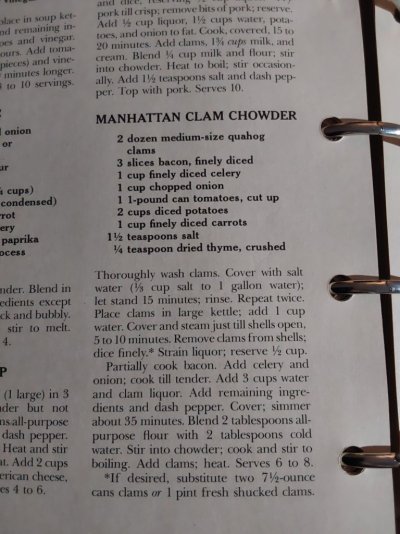 It doesn't sound like either Julia Child or Jeff Smith. It could be Good Housekeeppng or Betty Crocker - neither of my copies are that old. How about Joy of Cooking? DId he have that? This is from the 1964 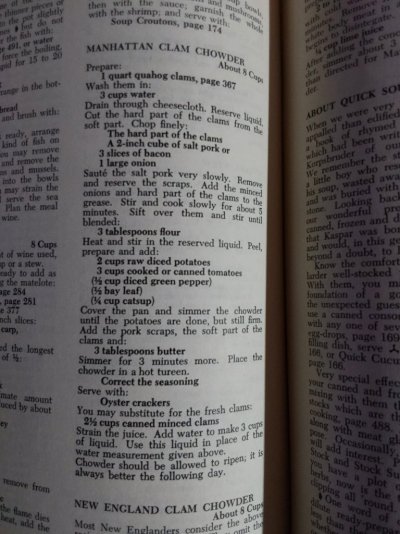 Silversage said:
My BH&G Cookbool is about 50 years old. Here is their recipe for Manhattan Clam Chowder. It sounds a lot like what you posted. Here's a photo of the recipe.
Click to expand...

Thanks! looks like we're on to something. With the basic measurements Im sure I could make it work. Definitely looks a similar. Im actually looking at old photos from my parents kitchen, to see if I could get a sneak peek of the cookbook shelf. Problem is, those pics weren't digital, do quality not great. What amazes me is the vivid memory of the ingredients , considering I was like 5 or 6 years old. Guess I was into cooking earlier than I thought.
C

Silversage said:
It doesn't sound like either Julia Child or Jeff Smith. It could be Good Housekeeppng or Betty Crocker - neither of my copies are that old. How about Joy of Cooking? DId he have that? This is from the 1964View attachment 62690 edition.
Click to expand...

This is the recipe that I use. I use the canned clams. The other ones are not available at my stores. I'm sure someone here abouts has them.

I remember it was a real chore for him to open the live ones, Im surprised he never cut himself.

Silversage said:
It doesn't sound like either Julia Child or Jeff Smith. It could be Good Housekeeppng or Betty Crocker - neither of my copies are that old. How about Joy of Cooking? DId he have that? This is from the 1964View attachment 62690 edition.
Click to expand...

The Joy of cooking recipe has the green peppers.
You must log in or register to reply here.

Soup Season, anyone got any upcoming soup plans?
4 5 6