I had bought a cute little (<2#) cottage ham before we left for Ohio, planning to make ham and beans soup. The weather, however, was too warm for soup (at least for Himself). Now that I have a proper ham in my fridge, I decided to simmer the cottage ham with baby potatoes and fresh green beans tonight. A slice of seeded rye bread on the side made this a perfect supper for a chilly evening. 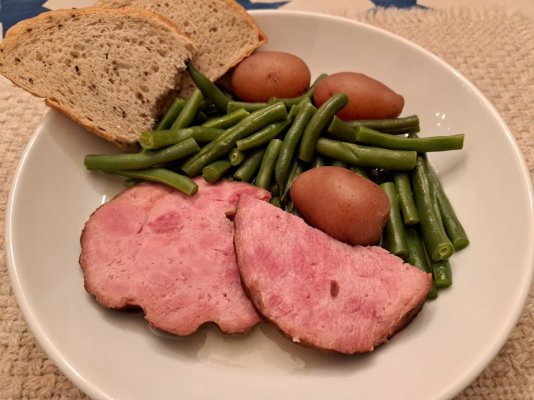 What's sup' at your place? 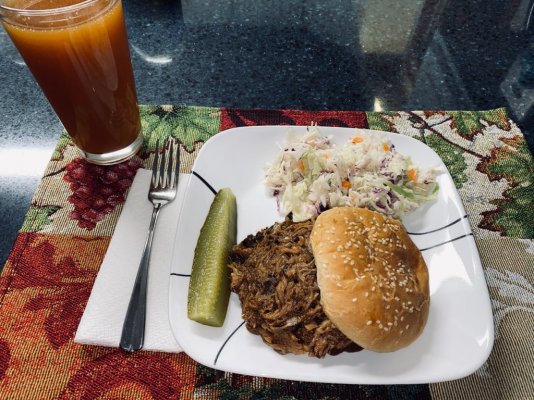 Since it was produce basket+ delivery day, we knew wouldn't up for cooking. I pulled some smoked salmon and some bagels out of the freezer and that's what we had. There was cream cheese, sliced onion, capers, and pickles to go with that. There was a bit of excitement with the pickles. It was a new jar. DH had a heck of a time getting open, using two ratcheting devices to do it. He can usually open jars that other people can't, without any devices. Well, that lid did not want to budge. And then it did. The lid flew off and the jar jumped out of DH's hands and there were three pickles on the floor and a bunch of brine. There was now not enough brine to cover the pickles. After supper, I brought out some sliced pickles, from the same company, Strubs, that were also fermented. We put the rest of the sliced pickles in with the whole pickles and some of the brine from the container of sliced pickles into the jar of whole pickles. That solved the brine problem and the problem of the problematic container for the sliced pickles. It was hard to open and usually sloshed some brine when finally opened. Sort of weird to have both sliced and whole pickles in one jar, but it will work for us. Supper was delicious, as expected. No pix, 'cause you all know what lox on bagels with a schmear looks like.
Last edited: Nov 15, 2022

Poutine. This was my first experience making, or even eating poutine. 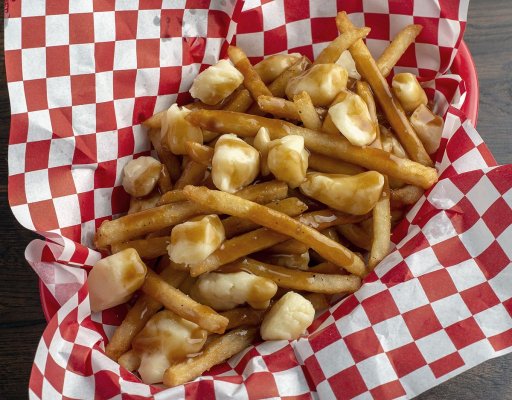 caseydog said:
Poutine. This was my first experience making, or even eating poutine.

As someone who lives where this was invented, I think that looks pretty authentic. What did you think of it?
C

Boneless pork chops, mac & cheese, corn, and the rest of my vanilla milkshake.

caseydog said:
Poutine. This was my first experience making, or even eating poutine.


- if I had to choose a fast food top favourite it would be poutine from Lafleur's!
The cheese should be melting a tiny bit, so it's sort of stringy as you eat. Hint, I warm my cheese up just for a second or 2 in the micro, then pour the hot gravy on, those slim fries (which you got spot-on! should be a little on the greasy side

My supper was the last of the chicken fries thighs with Sweet Potatoes and Green Beans.
Last edited: Nov 16, 2022 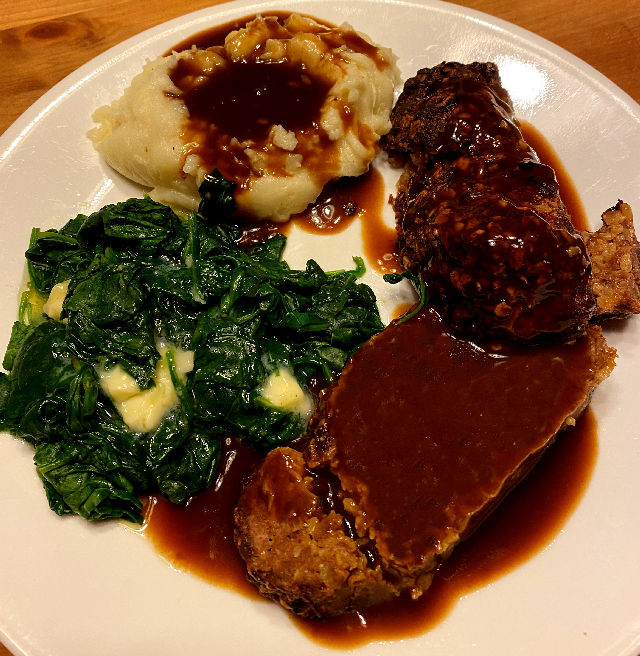 Sorry no pictures, but...we had SV Turkey Breast Tenderloins (Butter flavor OO, seasoned salt, pepper, garlic powder and chervil), with Stove-Top Stuffing (with sauteed onions & celery added), Oven Roasted Sweet Potatoes and Red Onion (OO, honey, black cherry balsamic and a tablespoon of "Ginny's Seasoning" - a gift from a friend) and gravy. It was a perfect meal for a chilly evening. And, can you say, turkey sands for lunch!? Woo hoo!
You must log in or register to reply here.