Bought some frog legs a few days ago and decided to try them on the smoker. I've never had them or cooked them so I figured I had nothing to lose. I had 6 frogs and used 3 different rubs. The Rooster Booster is for chicken and I heard that these taste like chicken so I tried that. Then I wanted a plain salt & pepper to not hide the taste of the frog legs, and finally went cajun with Tony C's. I did rub with evoo before apply'n the rub. 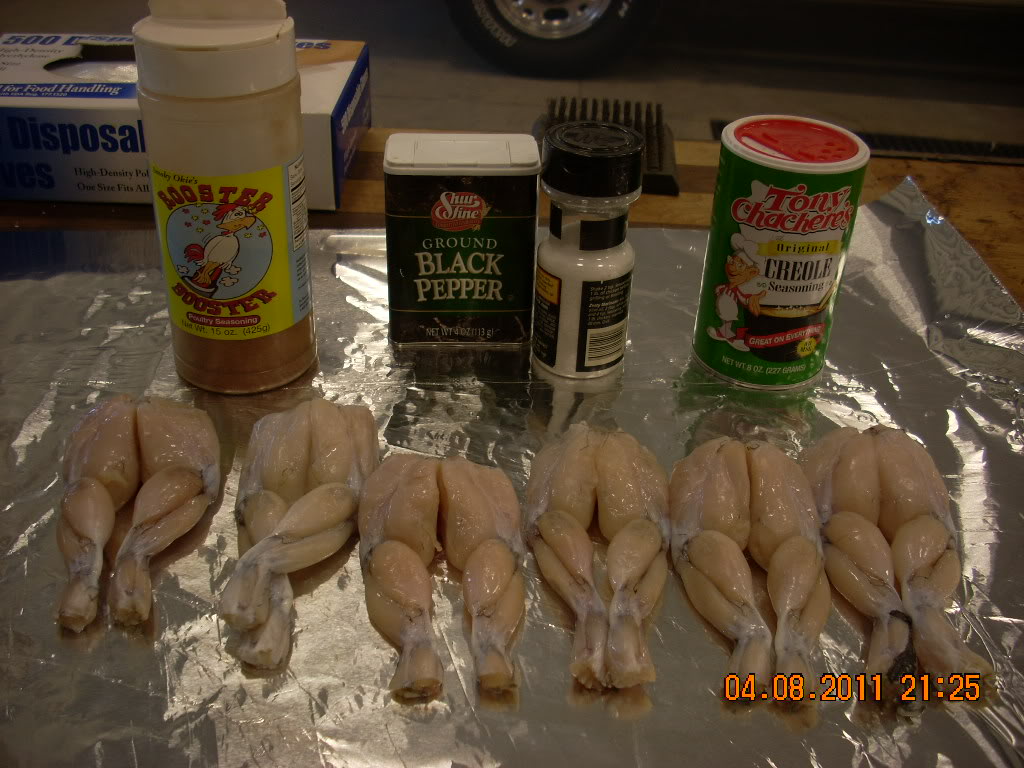 They were all three on different smokers, somewhat. I had both sides of the Lou going with chuck clods for someone else and the traeger had a brisket for us. All 3 set at about 250, but the traeger was running a bit cooler, maybe 225-235. At the 1.5hr mark I put them in foil, I was wanting them to get up to 160 but they weren't get'n there so I foiled to keep from dry'n out. Then at 1hr 45min I took them off cause it was time to go out and plant some potatoes, garlic, onions, and sweet corn in the garden.

This is what they looked like. Kids thought they were too fishy and wife wouldn't try them. The rooster booster ones(lift side) were ok, but I won't use that rub again. They were fall off the bone, but the rub just didn't work with the legs. The middle ones were s&p and they were pretty good. Too much salt on those little things, but I could taste the frog real well, good taste. The cajun was on the right, they were not as over done as the others so were a little bit more juicy, but the cajun rub was perfect for them, imho. Alot of meat on them w/very little waste. I was very impressed with the taste, reminded me of crappie or some other fresh water fish, but not catfish.

Anyway, these 3 filled me up just right. Great snack for long cooks or would be a great alternative to wings, imho. 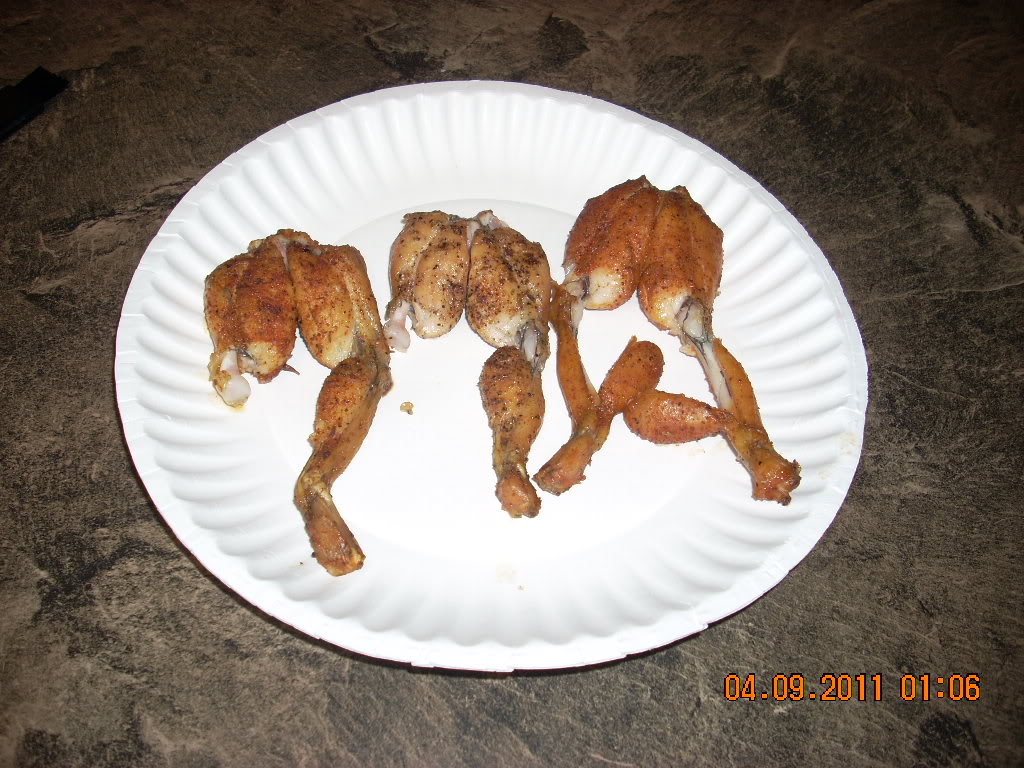 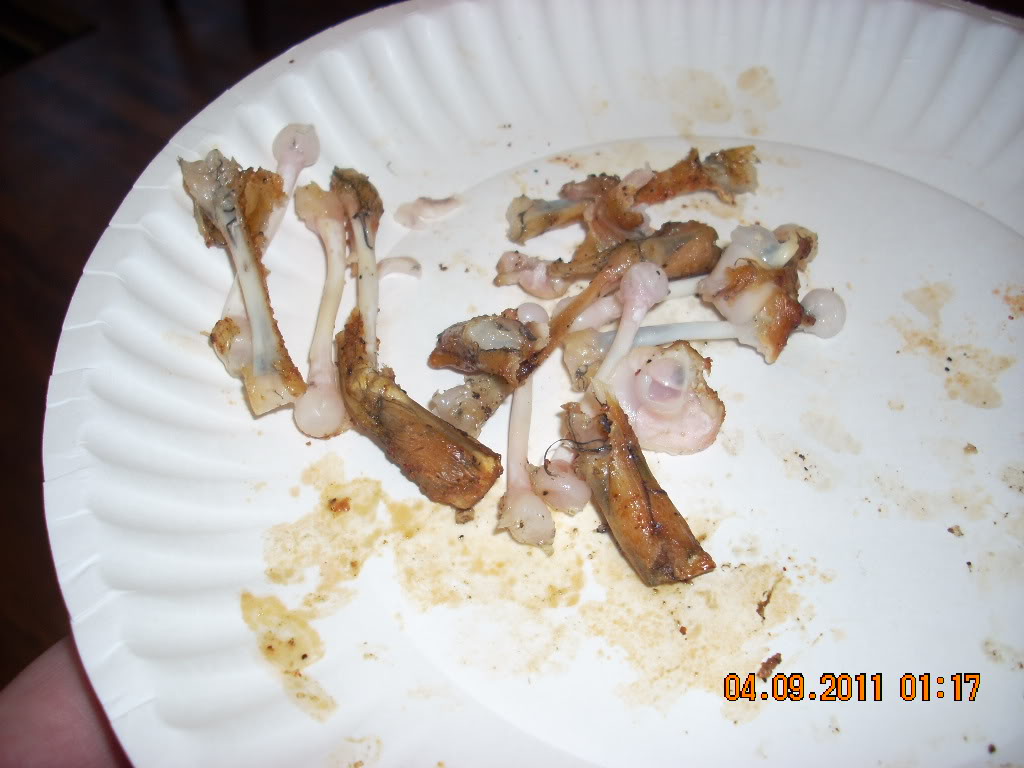 Never tried frog legs, not sure where I could find them around here.

Nice job.
As I was reading I was thinking the cajuns were probably the better. I like just salt, pepper and garlic, but I've only sautéed them.

Love frog legs. I eat them about once per month. They are on the menu at a local restaurant here. Yours look great!

Long time ago...In my teens and early adult life, frog gigging was a ritual thing...We loved them lightly fried...the muscles still quivering as they hit the pan...On a good night 25 to 35 was no problem...Tom, my gigging buddy was killed in Vietnam...I never think about him or frogs without thinking about the other................
T

I used to love frog legs...but they made me a little jumpy.....sorry Al...could not help it

This thread really sent me back. I remember my Dad down in the basement cutting up frogs. Now please don't get the PETA folks on me but I remember watching all kinds of upper frog halves crawling around the basement. I don't know why they didn't just pass on to their rewards(?) but that is the sight I see every time I see frog legs on the menu in a restaurant.
T

Yeah...I know what you mean...like when I buy chicken drumsticks...all those poor chickens in wheel-chairs....

I find frog legs in my local asian market

FrankZ said:
Thanks for sharing.

Never tried frog legs, not sure where I could find them around here.
Click to expand...

lol, that picture of frog's butts seems funny to me for some reason...


always dragging her butt around.

buckytom said:
on a frog?

You never actually left grade school did ya?

lol. sorry. another lack of resistance.

Location
Locked in the stable with the sheep

I went into a cafe and asked,

"Good. Now hop over the counter and make me a ham sammich."

blackpig said:
I went into a cafe and asked,

"Good. Now hop over the counter and make me a ham sammich."
Click to expand...

Yikes!
You must log in or register to reply here.

M
My beef short ribs are too greasy. Any way to degrease them before meal tomorrow? Help!