Yesterday I updated my Indian spice mixes - something I always do in the fall, since the cold season is when I use them the most, and I throw out the small amounts left, as they are (mostly) ground spices, and I want fresh, for the upcoming season. Sambar masala and garam masala I use most, so they were made recently, and didn't need to be made again.

I made some Panch Phoron - the simplest one to make, since it is all whole spices mixed together, without toasting. It is used in Bangali cuisine, and keeps very well, since it is not ground. It is simply 1 tb each cumin, nigella, black mustard seed, fenugreek, fennel, and celery seed. That's it! 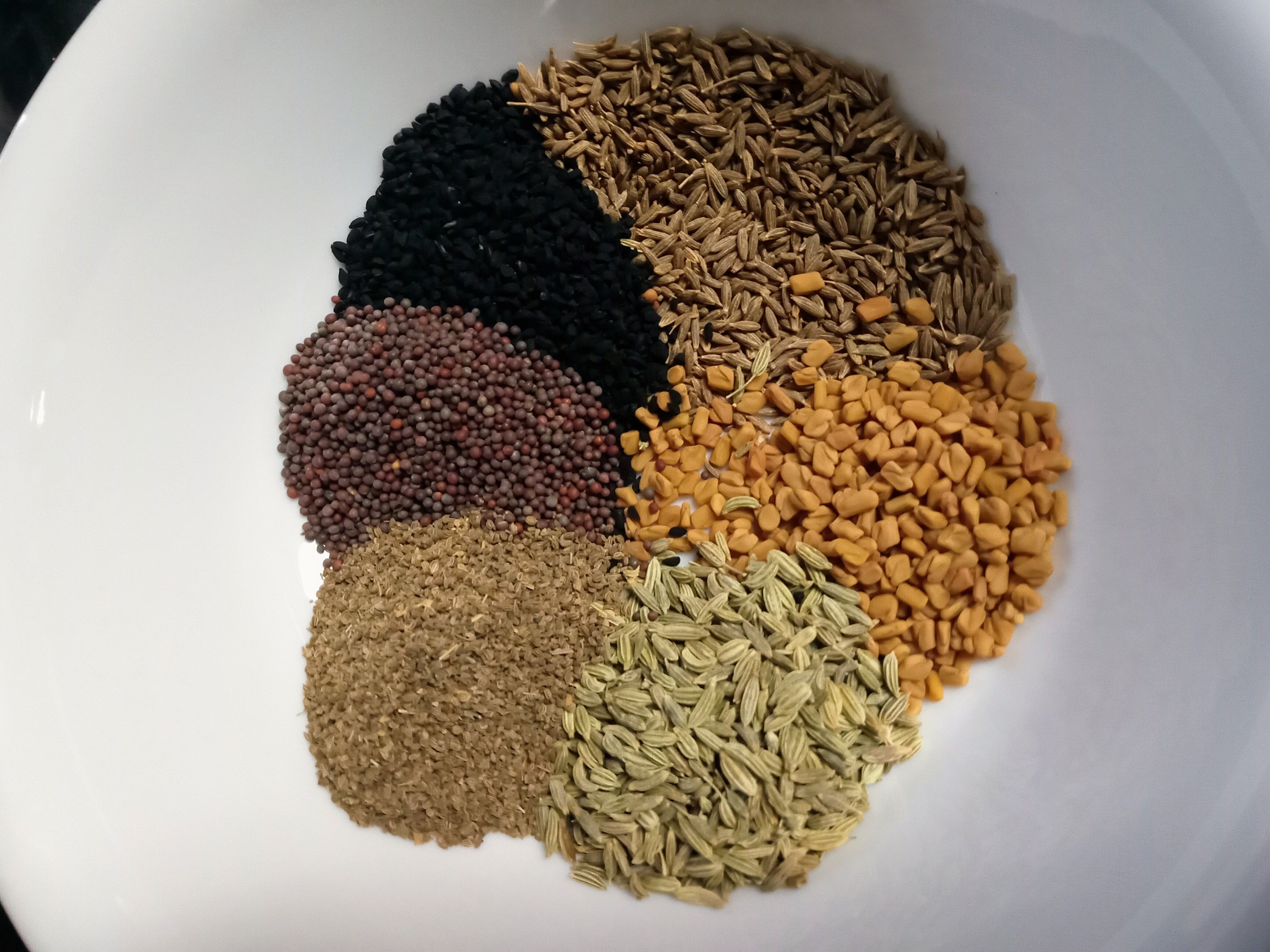 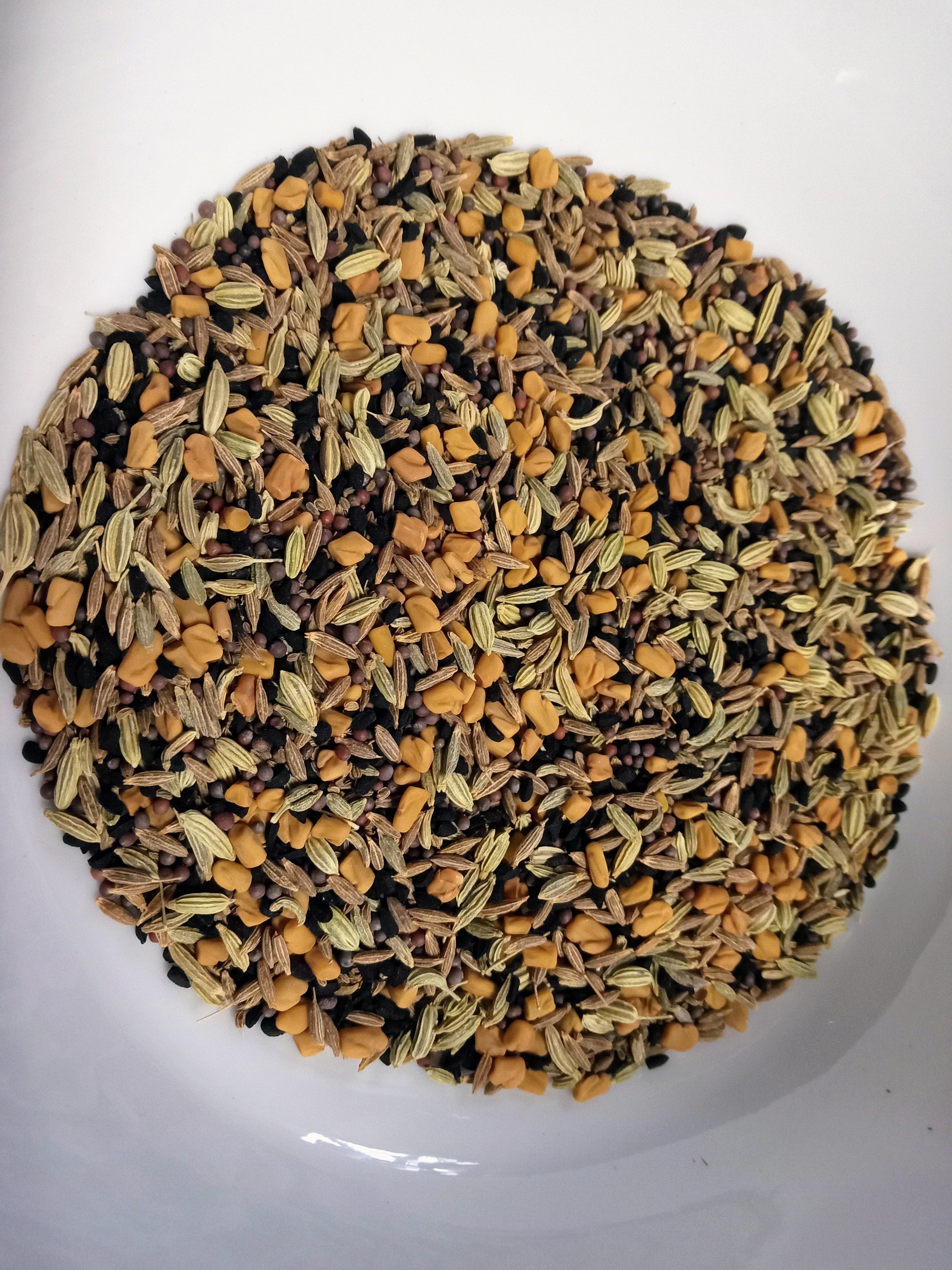 Panch Phoron, super easy as the spices are just mixed together, whole, with no toasting. by pepperhead212, on Flickr

The second thing I made was some Rasam Masala, which is a ground spice mix, used in S India in dishes called rasam, but it can be used in other dishes, too. This and the sambar masala I use the most, though I might find something else I like as much! 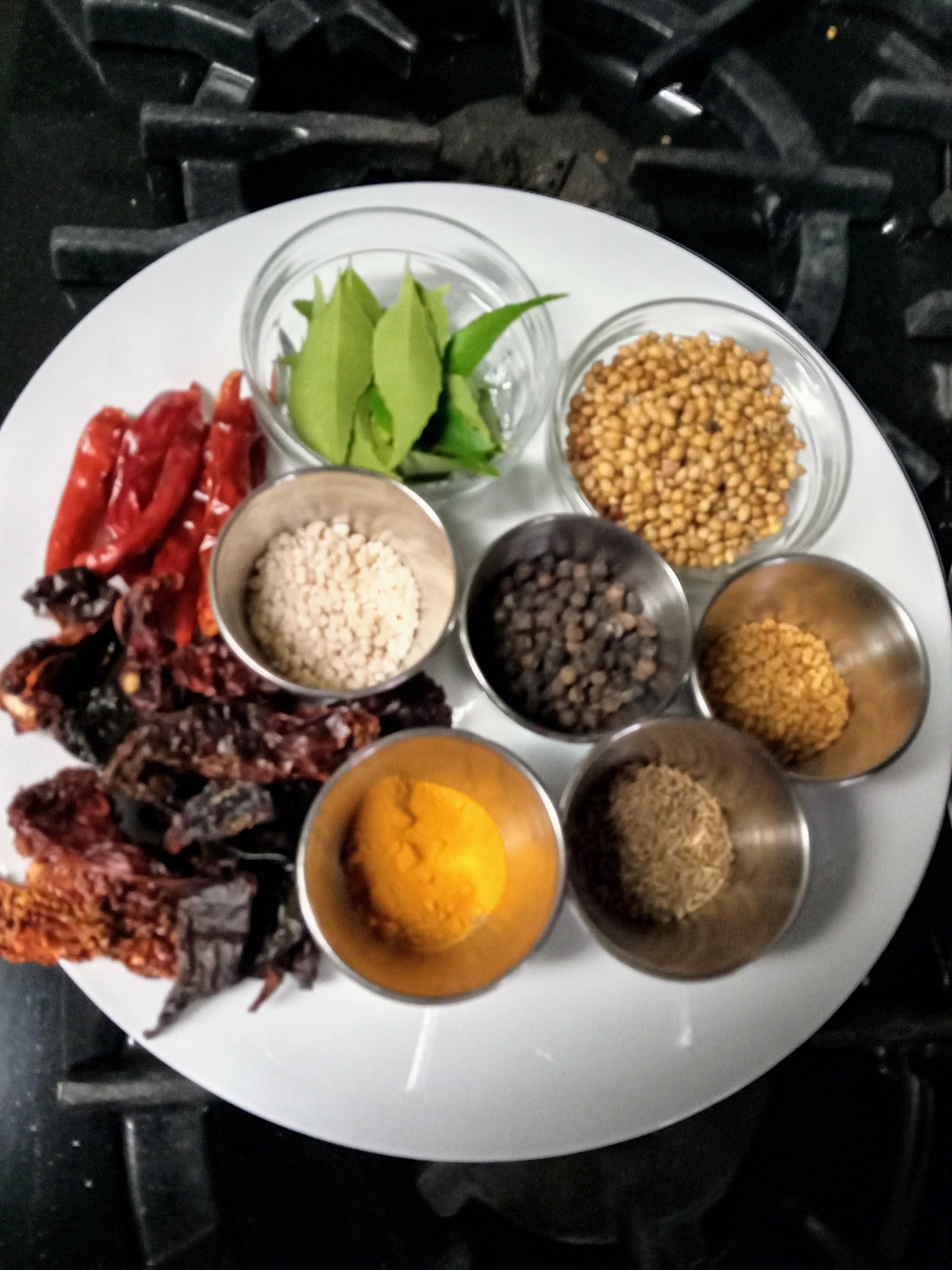 Spices for the Rasam Masala, to be toasted, before grinding. by pepperhead212, on Flickr A third masala I tried is one I haven't made before, and these last two I make by toasting them all in one pan at the same time, which looked easier! It is Pav Bhaji masala, which is from the Maharashtra state of India. As usual with these masalas, it takes longer to measure them out, than to cook!

Place over medium heat, and stir and toss for 2½-3 minutes, making sure the chiles don't burn. Remove to plate to cool.

When plate has cooled, grind the spices, along with the powders. Place in a jar, and store up to 3 months, or in fridge. Spices for the Pav Bhaji, ready to toast all together, except for the powders. by pepperhead212, on Flickr Toasting the spices for the Pav Bhaji. by pepperhead212, on Flickr Toasted, cooled spices, for the Pav Bhaji, ready to grind. by pepperhead212, on Flickr The last one I made - Malvani Masala - is another spice mix from Maharashtra, and has the most spices, and they are tossed in a small amount of oil, like the variety of sambar masala I make, which gives it a totally different flavor.

Combine all of the spices and oil in a 12" wok, and mix to thoroughly coat everything with oil. Place over medium heat, and toss and stir for 3-4 minutes, or until spices are golden, and chiles are crispened. Scrape onto a plate, and grind, along with:
1 tsp turmeric and
1/2 tsp freshly grated nutmeg

Store in a glass jar up to 4 months. All the spices and Chiles ready for toasting, for the Malvani Masala. by pepperhead212, on Flickr All of the spices for Malvani Masala, ready to mix with just 2 tsp oil, to coat everything, before toasting them. by pepperhead212, on Flickr Oiled spices for Malvani Masala, halfway through toasting. by pepperhead212, on Flickr Toasted spices for Malvani Masala, cooling, before grinding. by pepperhead212, on Flickr Your house must have smelled pretty good after all that prep.

It smells good again, with a dish I made with that malvani masala.

Sounds good!
I normally make a masala on the spot, but then I always make more, so I have some stock.
Not sure why I just don't make a lot in one go, but heck, it's what I do

I also usually make them on the spot for specific recipes, always with left over. I forget to label them ( truth is I'm too lazy to label them, have way too much confidence that I'll remember what it is), then forget what the blend is when I'm cleaning out my cupboard.

larry_stewart said:
I also usually make them on the spot for specific recipes, always with left over. I forget to label them ( truth is I'm too lazy to label them, have way too much confidence that I'll remember what it is), then forget what the blend is when I'm cleaning out my cupboard.
Click to expand...

You could write the name on with a sharpie. It might rub off a bit if you write on glass. Depending on the plastic, you might be able to scrub it off, but rubbing alcohol will take it off. It's quicker than putting a label.

@pepperhead212, do you ever use fresh turmeric? I'm curious because, the place that I get most of my produce sometimes has fresh turmeric roots/rhizomes.

@taxlady I have used fresh turmeric occasionally, usually in Malaysian or Indonesian recipes. I don't see many Indian recipes with the fresh. Here's a link with a few. The same blog has over 3,000 recipes with powder, and that shows up here, but if you click it, it shows the 17 fresh. I thought I'd posted wrong, but it just shows up wrong. Strange thing...

Thanks Dave. Are there any recipes that you particularly like that use fresh turmeric? Is there much difference in the taste?

No, @taxlady, there's nothing in particular that really appealed to me that much that I would remember them, or something write the recipes in my book! I actually have some really old turmeric in the freezer, in a vacuum sealed bag, but I can't remember the last time I used it! The dried powder doesn't have as much flavor, and is pretty much unnoticeable, when cooked in a dish, but that's not a bad thing. The galangal, OTOH, I use in a lot of SE Asian dishes, in which it is essential fresh.

I used once, when following a recipe I saw on YouTube. It was ground into a paste. It has like the consistency of a carrot (when biting into it), and a watered down turmeric taste (which makes sense). Coincidentally, after reading this post a recipe from someone I follow, using fresh turmeric , was posted on my Facebook. Since Im going shopping later, I figured I'd give it a shot. Its a Malaysian Soup using a Malaysian curry paste (which calls for turmeric). There are some nice Thai recipes of fish in coconut-turmeric sauce. It looks great and tastes very good as well.
But I agree, there is not that much difference between dried and fresh, unlike ginger and galangal, where the difference is enormous!

As to quick labelling: I use masking tape to go around the jar (so it sticks back on itself) and write on that

Badjak said:
There are some nice Thai recipes of fish in coconut-turmeric sauce. It looks great and tastes very good as well.
But I agree, there is not that much difference between dried and fresh, unlike ginger and galangal, where the difference is enormous!

As to quick labelling: I use masking tape to go around the jar (so it sticks back on itself) and write on that
Click to expand...

Putting the tape on a container is an extra step while labelling. It's also often extra work later, when you have to deal with getting leftover adhesive off the container.

@taxlady That painter's tape comes off much easier than others, with no residue. It also holds in the freezer, so I never buy any of that freezer tape anymore, which always left a residue.

Exactly what I was going to say @pepperhead212
S

Making your own Indian spice mixes, also known as masalas, is a great way to control the quality and flavor of the spices used in your cooking. Here are some steps to help you make your own masalas:
Making your own masalas allows you to customize the flavor and create a blend that works best for you and your family. Happy cooking!

Welcome to the forum, @spicyorganic!

Nothing like homemade masalas! And not really that hard to make, as long as you have all the spices.
Last edited: Friday at 12:38 AM
You must log in or register to reply here.

A different type of pav bhaji

Another sambar masala, with 3 dal, 3 vegetables, and barley