The Story Of The Chicken Things

My Mother was an exec. at a firm, one of the VPs and they all knew each other and got friendly. Thing is she started from an entry level position. skilled of course, but never done this before. So all the way up as it goes, the rest all have the same last name.

So one day one of the guys or whatever tell her about it, she goes to see, the natural shopper, and finds these chicken things.

A chicken breast, shaped around cheese and broc. Nice pieces of broc, real melted cheese. The whole thing was breaded. The instruction said whatever, I cooked a couple and got the hang of it. Then I was eating them more, whenever they had them I went to M' with the money and picked up a box or two

This went on a while, get one good year and then the sky fell. Maybe like a year and a half. Behold:

The death knell, as it proved to be. The cheese was now a cheese sauce made in a roux. The broc was those teentsy little florettes they put in packs of Ricearoni or what... Knorrs. Dried.

Yeah, they said that is healthier. For their bank accounts i guess.

Anyway, as usual I want to make it myself. They used fine breadcrumbs, I kinda liked that so it stays, so does everything, cheese whatever BUT...

It seems like you nee a stainless steel cup where you lay out the breast and then have something, maybe the next cup in the set, have a nice board to not screw it up, pound it down to grow the sides of the breast up the walls of the cup.

And as near as I can figure, they precook them a little bit in those things. Take one out the freezer and it is not red, it look cooked. Cut in and you find it is not. It is probably just about enough for it to hold its shape.

It sounds a lot like chicken cordon bleu with different filling ingredients.

I agree, having made cordon bleu. There is only one different ingredient.

Tip: the first stuffing method can be used for chicken Cordon Bleau. I just wanted to show you two stuffing methods. You can also stuf bone-in chicon breasts by inserting a finger between the main muscle, and the tenderloin, then filling the cavity with your choice of filling.

For your cheese-broccoli filling, I would use gruyere, or ementella cheese, with broccoli florets, stuffed using the method from the first video. Make a thick sauce of heavy cream, and cheese. Add the broccoli. Place into the fridge for an hor. Make cunnels of the cheese, and broccoli. Proceed to stuff the chickens by your chosen method. coat, fry, and bake. 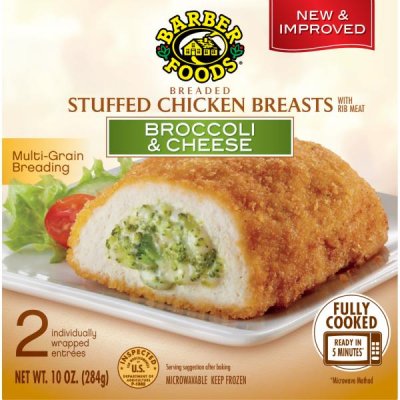