Well, I’ve gotten WAY behind on my netflix movie reviews thanks to how busy I’ve been but likewise Im not sure if you guy’s would enjoy what I’ve been watching. Half of it is too violent (natural born killers) and half of it is too foreign (samurai fiction, akira kurosawas dreams, the bicycle thief).

Either way a recent trip to china town provided me with a bunch of great martial arts movies (kung fu hustle, ong bak, hero, house of flying daggers and the god of cookery) and well one REALLY stands out. It’s a Steven Chow movie (the director loves to do absurd special effects packed farces) about cooking.

The main character (played by Chow) is a SUPER stuck up and just plain mean chef known worldwide as “the god of cookery”. He goes around casting horrible insults at some of the worlds finest cuisine but he hides a secret… he himself has no formal training. Eventually this fact is exposed to the world by his “humble assistant” who turns out to be a master chef and usurps the “good of cookery” title for himself.

Our hero ends up doing time for serving tainted beef (on that one account he is framed) and must learn how to be humble and cook for real once he is released from prison, forming an pact with a slightly disfigured street vendor who used to be his #1 fan. By the time the movie reaches its end you’ve seen cooking, dancing, kung fu, TONS of lowbrow humor and even a weird music scene sung by the street vendor character (and romantic interest). Also it’s got TONS of really off the wall kung fu movie references, such as the “18 bronze men of shoaling” who keep beating our hero nearly to death.

I really recommend you guy’s look into seeing this film… it’s definatly weird and all but probably available at your local “Chinatown” or on the internet. Some pics: 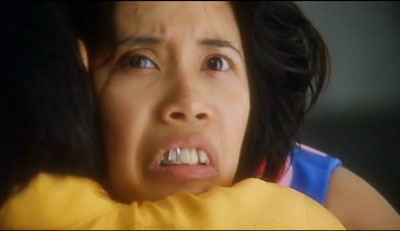 Every ones favorite "tough as nails" street vendor. 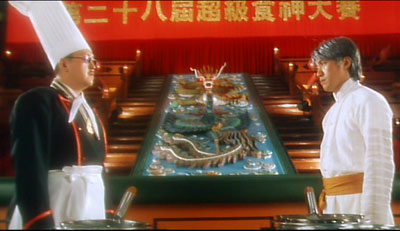 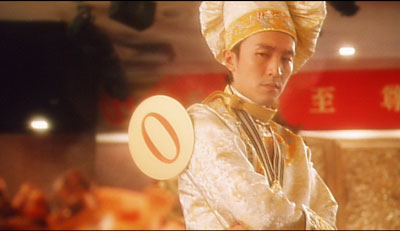 Like I said, the hero is SO not a nice guy.

The master in action

I remember having a conversation with you about netflix. I dropped them after having too many complaints about their service. I went with BLockbuster. Netflix kept sending me the same videos. I got 3 videos of beetlejuice. How? i have no idea. then when i would get another video it came up broken or lost before i would even get it. To much hassel. do you have any suggestions on funny movies. I got Spongebob for my girls and band of brothers for the hubby. Need one for me.

I am usually not into Kung FU movies (I know this is not actually one of those), but this movie sounds very interesting. I am going to keep my eyes open for this one.

3 copies of beetlejuice? Now that... is... weird... so far they have treated me nicely except for 2 cracked dvd's (In both cases I recieved a replacement 2 days latter).

Funny movies that not that many people have seen:

Brain Donors: this movie is really funny but it's also got a headache inducing fast pace. The star John Tuturo (one of my favorite actors) and this "59 jokes per minute" comedy channels Abbott and Costello, The Three Stooges and the Marx brothers quite effectively.

Napoleon Dynamite: Im willing to bet you already saw it but if not run out and buy it! It's the story of an uber geek in high school and somehow comes across as raw and new despite it's pg rating.

And if you want something insanely campy and cheesy...

Once Bitten: a 1985 Jim Carrey vampire movie. Oh yeah... I cant begin to describe just how bad (in a good way) this movie is.

thanks lugaru, I have seen Once Bitten..That's an OLD movie. Napleon? Is it mushy? Don't like mushy movies?
One time I waited a week to get my movie from netflix. They did send me a replacement disc for the one that was broke but they said it was arriving two days later. After waiting 4 days to get it, and all the frustration I wasn't really in the mood to watch it.

The actors in this are great! I've seen many of their movies, though don't know their names.
N

too much iron chef for me, the screaming gets on my nerves.
You must log in or register to reply here.