What have you had for lunch lately?

For my lunch I tried something new-to-me. 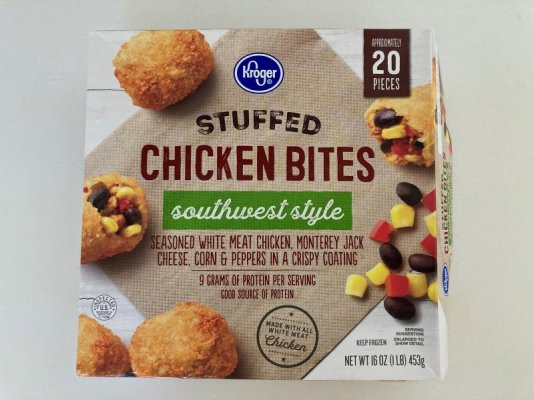 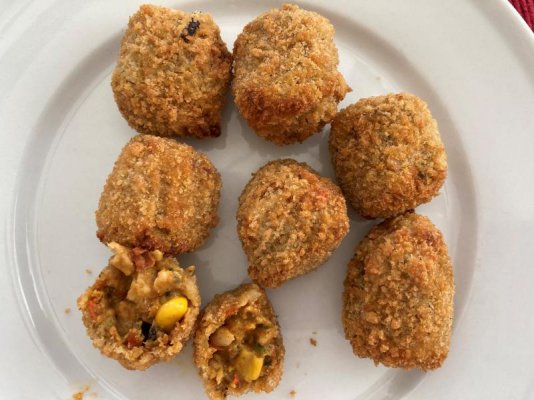 I made an extra one for DH to try, but after 1 bit I said, this isn't for you!
Meh, it's mushy in the middle.
The chicken meat is obviously great to obliteration, I see no Black Beans, but I can see some whole kernels of Corn.
I thought maybe some Sour Cream would help, not so much.
The rest are going in the trash bin.

<edit: it's a good thing I tried these before taking them to Neighborhood Gal Pals Card Playing Afternoon!!!>
Last edited: May 21, 2022

Kaneohegirlinaz said:
For my lunch I tried something new-to-me.

I made an extra one for DH to try, but after 1 bit I said, this isn't for you!
Meh, it's mushy in the middle.
The chicken meat is obviously great to obliteration, I see no Black Beans, but I can see some whole kernels of Corn.
I thought maybe some Sour Cream would help, not so much.
The rest are going in the trash bin.

<edit: it's a good thing I tried these before taking them to Neighborhood Gal Pals Card Playing Afternoon!!!>
Click to expand...

Looking at the picture, I see black beans, but no mention of them on the front of the package, just chicken, cheese, corn, and peppers in a crispy coating.

No photos `cuz I was just too dang hangry ...
I had some undressed Caesar Salad leftover from our take-out meal the other night, some diced Cucumber and some Chicken Salad from our local supermarket ... put it all together and that was my lunch.

For DH, a plain bagel that wasn't eaten from our breakfast, which I heated up in the microwave, added some sliced fresh Tomatoes from the farm by our home, some Ham & Swiss Cheese and more of that chopped Lettuce.

Not a good lunch today. I opened a can of Campbell's Chunky. Chicken and Corn chowder. I've eaten plenty of Campbell's soups, and enjoyed most of them. This one though. was lackluster, with very muted flavors, corn that had no flavor, and noodles that were so overcooked, you almost couldn't tell what they were. But I felt chilled, and it was hot.

The vanilla shake, made with rice milk, was very tasty, but didn't help warm me. I finished lunch went and crawled in bed with the covers pulled over my head to warm up. I fell asleep, and got a good rest.

Now, it's time for something hot for dinner, and then, back to bed. Wish I could have some hot Kielbasa, with sour kraut. that would be tasty right now, all hot, with catsup, and on caraway rye.

It's been a quiet day of tying flies. I now have about $250 worth in my fly box.

I had a sloppy joe sammich from left overs from last night.

Just finished breakfast so let's call that lunch. Scrambled eggs, ham and an English muffin with butter and strawberry jam. 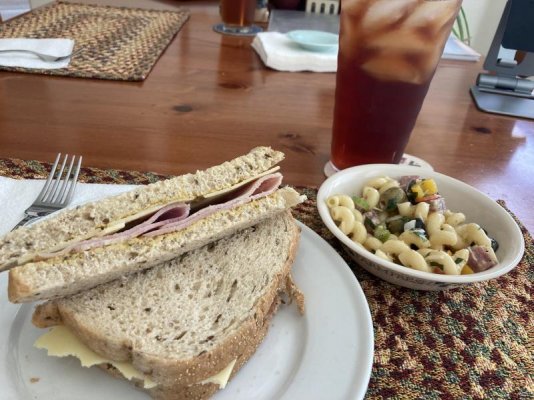 Very nice!
Ham & Swiss on Rye with a side of my Loaded Pasta Salad, oh and Iced Tea to wash it all down with.

After mentioning it in that other thread, I had to make that first batch of lentil salad! That first bowl of the season is always so good, since it's been so long!

That first recipe I found called for it called for 2 cups of halved cherry tomatoes, but I increased that quickly, and now I usually put 5 cups in!

This was a late lunch, about 3 pm, and I resisted eating another bowl, as this large bowl was filling! 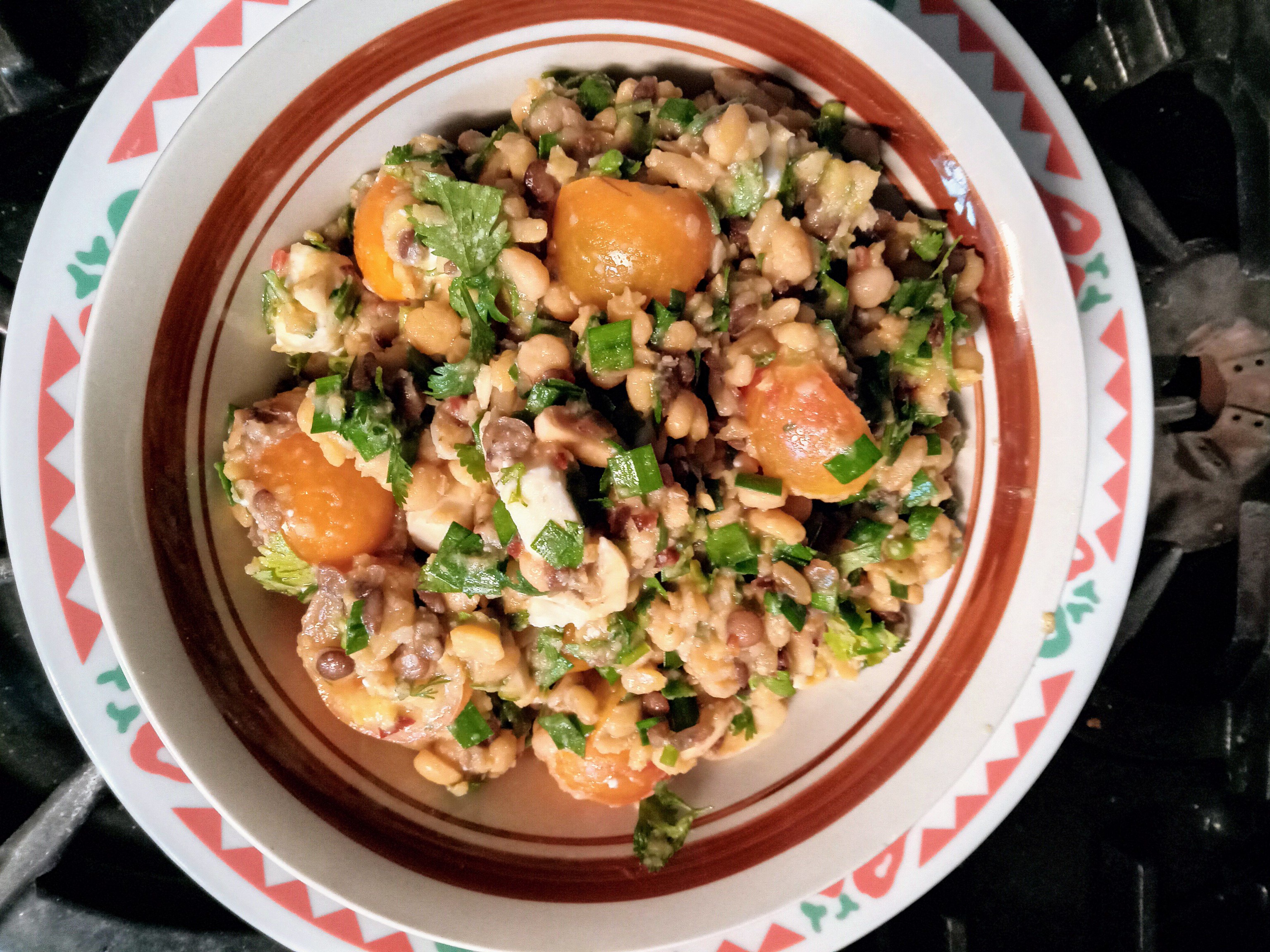 Here's that first batch of lentil salad I look forward to every season! 7-7 by pepperhead212, on Flickr

Today was leftover homemade soup. I had COVID last month and made several different types of soup then. This one was from a Mexican cookbook (1000 Mexican Recipes) and had fava beans, corn, onions, and jalapeno. I'm not vegetarian but a bit cash strapped having both car payments, student loan payments, and credit card payments, and plant-based is definitely cheaper than meat these days. Soup is fairly easy to make (mostly chopping veggies + protein of choice and adding seasonings) and the leftovers freeze well.
Last edited: Jul 7, 2022

Earlier today, I had a craving for Mexican, so I made something using those tomatoes I had to trim the bad parts out of - ended up being 3 cups of them in the Vitamix, to which I added about a half cup of those garlic scapes, and 3 canned chipotles and 3 dried moritas. I blended this for 3 minutes or more, 'til it was steaming, then poured into the Instant Pot. Set it to sauté/high, and cooked it down to a very thick sauce, stirring frequently, while dicing up one of the bottle gourds, and those two sambar cucumbers. These smelled and tasted like any other cukes, but are often cooked, in Indian dishes. This was over 3 cups of vegetables, which I added to the IP, now turned off. Then I added 3 c water, and a scant cup of grits, to which I added about 1/4 c masa harina, to get that flavor. I added about 1½ tb of dark soy, for that umami flavor, and the salt, mixed well, and simmered about 30 min. on slow cook/high, to cook the grits and vegetables, stirring a few times. I stirred in about 3/4 c of that "taco style" cheese from Aldi, and that was it. A delicious Mexican tasting mash, and amazingly, those vegetables still had a bite to them, after cooking over 30 minutes! A summer squash cooked like that would disappear.

Here's what was leftover: 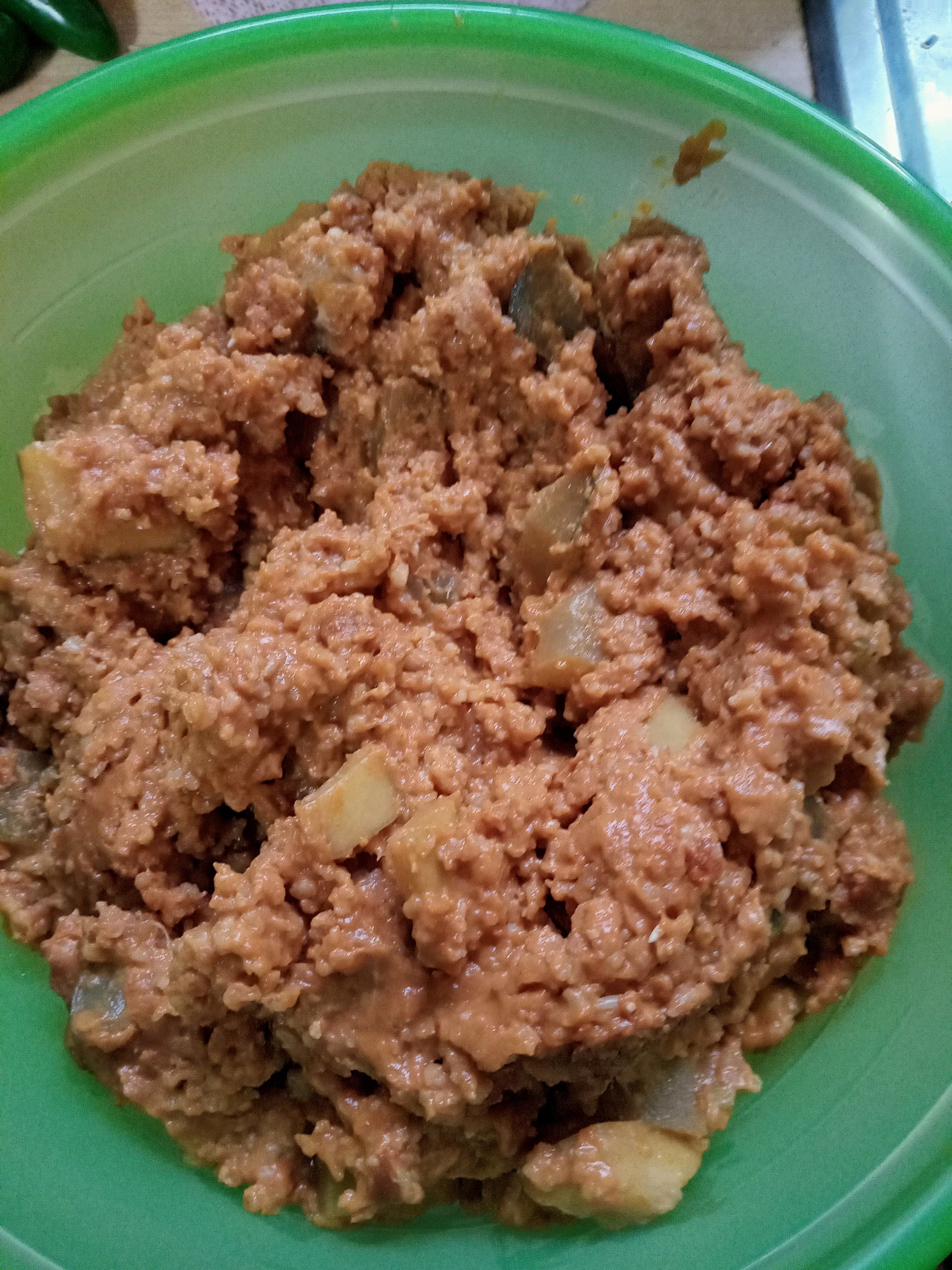 I finished some leftovers today, but also made the first batch of guacamole of the season, using some of the fresh vegetables of the season. The avocados came down in price, so I got some on my last Aldi trip, and they ripened today. A friend came over when I texted him about it! 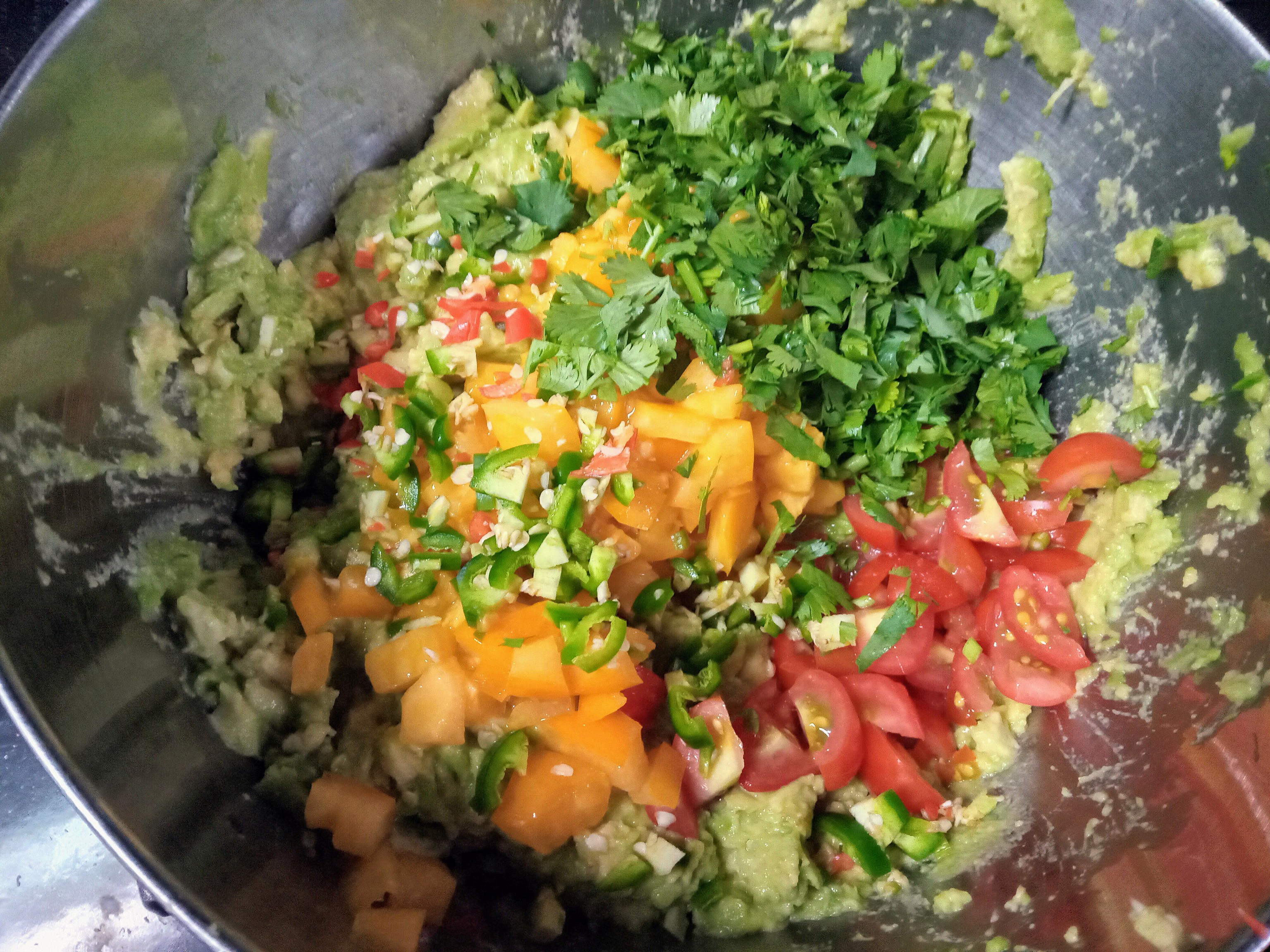 Guacamole, before stirring everything up! by pepperhead212, on Flickr

It was leftover rice from last night's dinner, eaten cold, with a cold, cling free ripe peach. It was tasty and refreshing.

Cut open the perfect avocado today and had avocado toast. 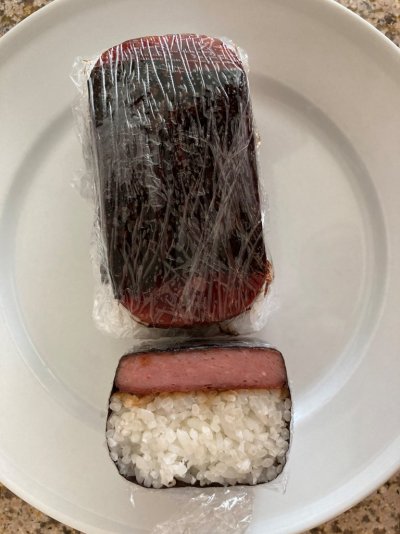 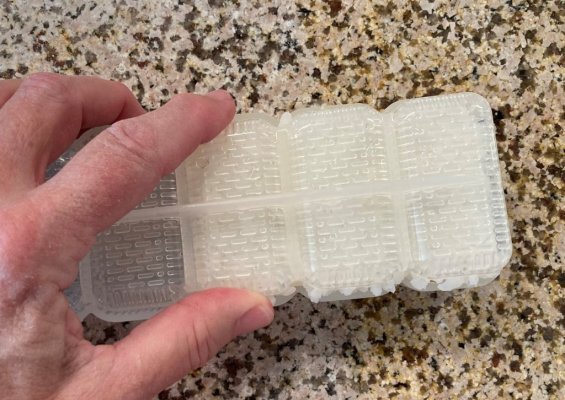 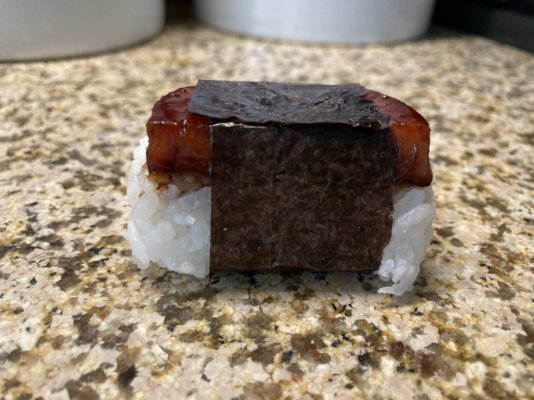 I was making up the standard sized Musubis for lunch for DH & I and had a bit leftover.
Why Waste!
I made up three Nigiri sized or what I'm calling Mini Musubis for Mister Next Door Neighbor to try. He had made mention that he loved Sushi, don't know if he cares for Spam®, but we'll soon find out.

One of my Neighborhood Gal Pals gave me her previous issues of Taste of Home magazine. I found this recipe in the Feb/Mar publication 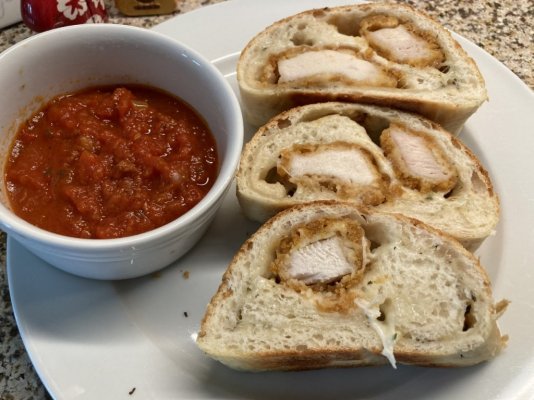 I had a couple of hot dogs. 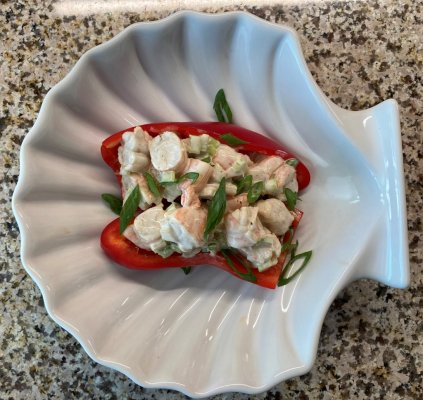 Mini Sweet Bell Peppers stuffed with Shrimp Salad, I use to make this for appetizers back in Hawaii, but I bought the Shrimp Salad. So this is a two-fer: Never have I ever made - Shrimp Salad, it was divine!

I'm staring at that shrimp salad Kgirl, I see two round smooth things that for the life of me look like sliced fingerling potatoes. What are they? What a great idea for starters, stuffed into those mini peppers.

That looks sooo delish!
You must log in or register to reply here.