Been going through a pizza phase since I purchased an electric pizza cooker at Goodwill. It is a stellar device and even does more than just cook pizzas, which means Alton Brown couldn't classify it as a "unitasker."

At any rate, there's a pizza restaurant in our area called Pizza Warehouse that makes some of the best pies I've ever tasted.

Glenn and I love the one called "Meaty Maddness" and I hope to duplicate it tonight. Made the dough yesterday and I prepped all the topping ingredients a little while ago.

We'll chase it with a raspberry pie I made this morning.

We are having A/F "grilled" hot dogs on brioche buns, potato salad and chips.

I made my last raw tomato pasta sauce of the season today, since the basil is almost completely gone from those cool nights (soon, however, the hydroponics will take over), and I used up the last 2 lbs of tomatoes at once (a few still there, but not all at once). I added some minced garlic, basil, and olive oil (the base recipe), plus some chopped niçoise olives and minced anchovies. This time I added a can of rinsed cannellini beans and a half cup of quinoa, which I cooked quickly in the Instant Pot, then rinsed and drained it, before adding to the mix. 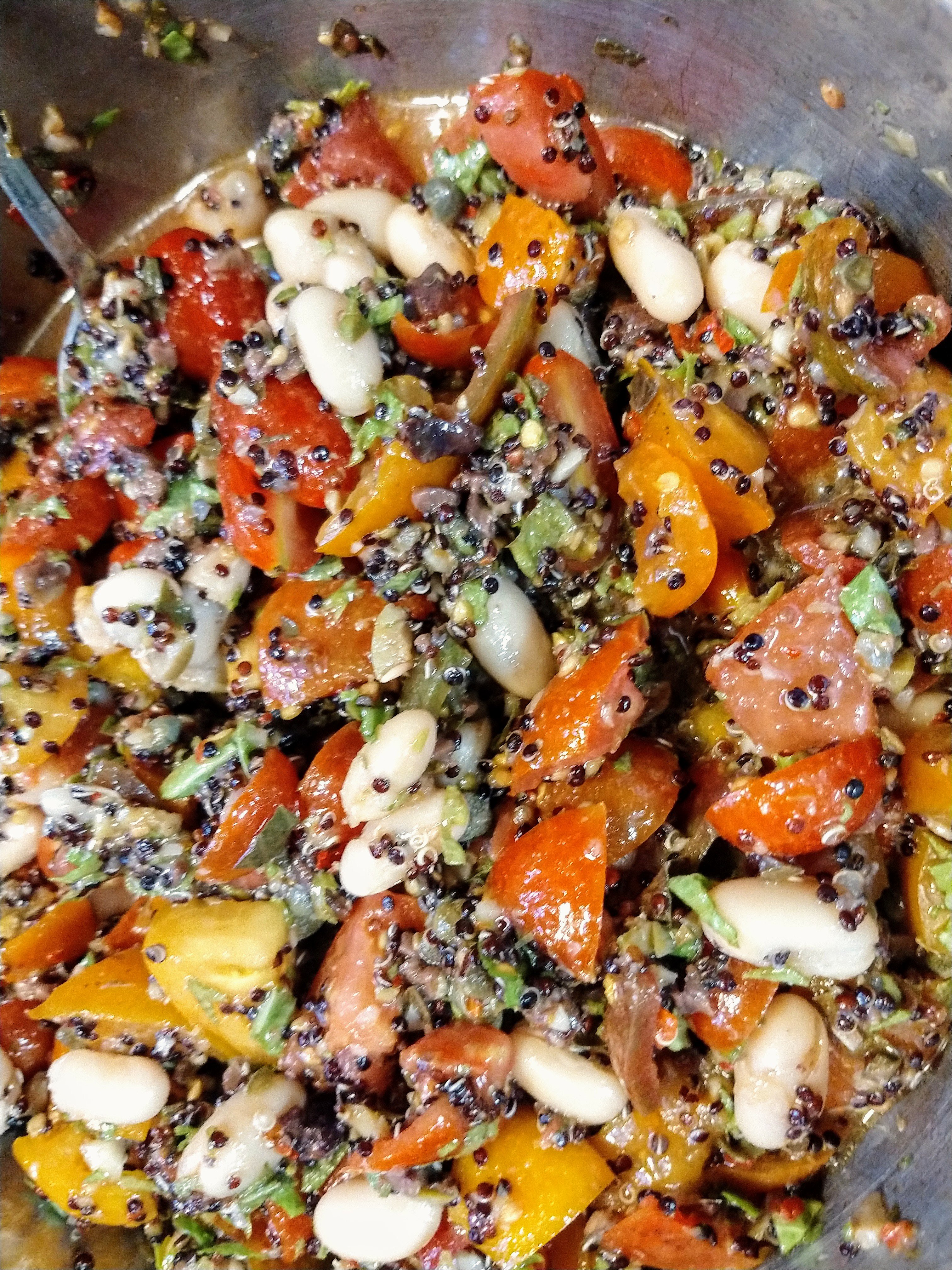 Last raw tomato sauce of the season, before adding the pasta. by pepperhead212, on Flickr 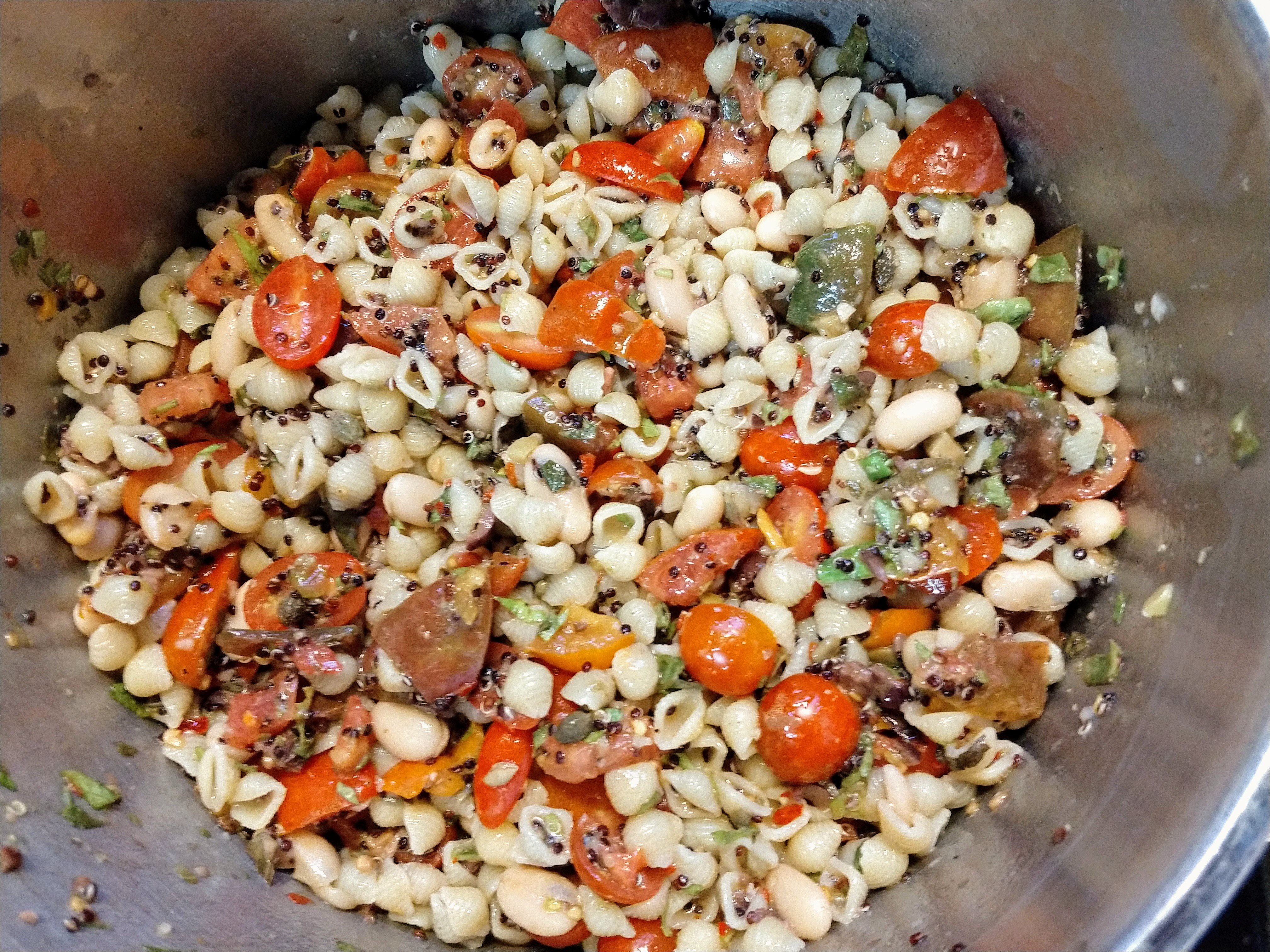 The plan for tonight is that dish I'm so identified with, fluffy, moist, blueberry pancakes. My kids said they would put on my tombstone - Here lies the Pancake King. I hope not. I'd rather be remembered as just -Dad. That was my greatest endeavor, and the most rewarding.

Honey Garlic Pork Chops [emoji16] with buttered egg noodles as the side.

This one is another keeper!!

All three of this week's new recipes were really very good. 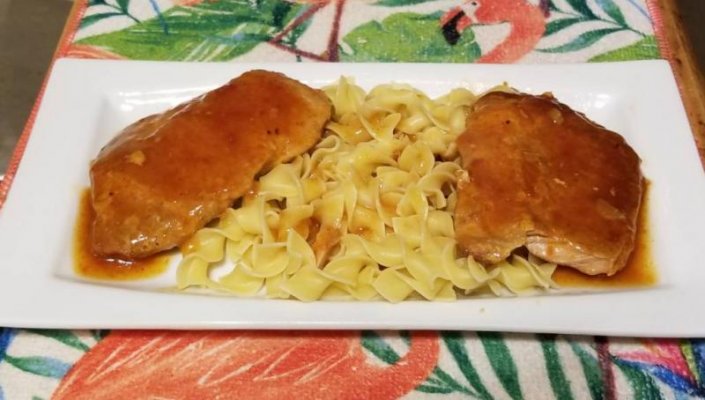 This week when I received my grocery basket from Lufa Farms, I got a surprise. They gave me a piece of marinated Angus beef flank steak. Since I didn't order it, I don't have to pay for it. It's really not something that I would order. But, since I have it, I used it for supper tonight. It was a small piece, but almost adequate (we are supposed to be cutting back on red meat, after all). It was in a Dijon and shallot marinade. I fried it and deglazed the pan with cream to make a simple pan sauce. I also served boiled potatoes and a salad with homemade "Italian" dressing. While the beef was tasty, it was not the least bit tender, even sliced against the grain. Definitely not worth what it would have cost if I had had to pay for it. It was CAD53.30/kg = CAD24.20/lb =~USD18.35/lb! We won't be ordering that. The pan sauce was not exciting, but worked well enough on the meat and on the 'taters. The salad turned out better than expected. When I sliced the meat, I discovered that it was done the way I like it, not nearly enough for DH. So, I turned the heat back on under the pan and fried his slices. I'm glad I didn't save it for a special occasion.

Sorry about the quality of the pix. I was using my tablet, since my phone was charging.

We had choices, tacos, burritos or taco salad. I made a burrito with a taco chaser.

Leftovers. Tubs and tubs of leftovers... 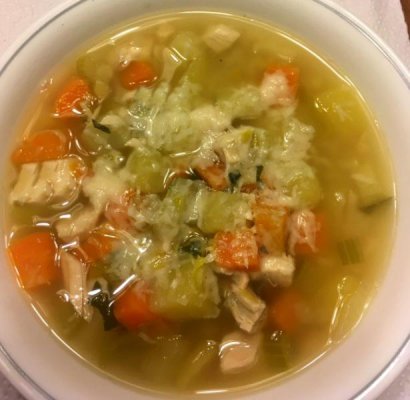 Honey Garlic Pork Chops [emoji16] with buttered egg noodles as the side.

This one is another keeper!!

All three of this week's new recipes were really very good. Um, technically, those aren't "the side", they're "in the middle". They look good. How sweet are they, though? And what's the name of the slow cooker book that you're using this week?

Had some cooked skirt steak in one of the freezers. Perfect for some Ropa Vieja.