When I lived in San Diego, my wife and I took a trip to 29 Palms, and sampled/purchased date varietals. I grocery stores, the only available dates were Medjool, and Deglat Noir. At 29 Palms, I fell in love with Barhi Dates. They are unique in that both the unripened, and ripened dates are wonderful. Some other outstanding varietals can be found here _ https://harvesttotable.com/popular_date_varietieshere_are/

if you haven't tried any dates but those seen on grocery store shelves, you are missing out. Fresh figs are amazing as well.

Do you have a favorite date; and how do you use them?

My Mom's date filled cookies were a Christmas treat every year. If anyone wants the recipe, I'll share it on DC.

Hamentashen filled with date, or fig filling would be great as well.

I am not familiar with anything but grocery store dates. I would like to taste other kinds in a sort of date tasting. But, I'll say this about dates, I have never tasted one I didn't like.

I use 'Sun Date' dates, which are medjool or deglet noor type of dates, mechanically pitted, in 2 lb containers for $5.99 which is about as inexpensive as any dates available. (always go through them one by one to make sure the pit is out)

I use them mostly for sweetening baked goods, and sometimes energy balls. I make them into a date paste, cooking them down with water, on the stove, processing them in a food processor, then packing them into 1 cup jars and freezing them. Black bean brownies, carrot cake, zucchini bread, danish gingerbread balls.

The other way we use them is to stuff them with a nut and top with chocolate, or stuff with dairy free chocolate chips then top with natural peanut butter or walnut butter, like a candy bar.


Dates are nature's sweetener, high in fiber, low in fat with lots of nutrition as compared to other sweeteners. They are higher in sugars than most fresh fruit and used in moderation are wonderful.

Thanks for the reminder Chief, I put them on my grocery list, to stock up before winter.

Funny thing - I just baked something tonight with dates in it! Medjool is the variety I usually see, if it is listed. A place near me sometimes has dates on their digital sale, when I have stocked up on them for $2.49 for 1 lb packs. I have vacuum sealed several for my pantry, and simply refill a qt. jar upstairs.

pepperhead212 said:
Funny thing - I just baked something tonight with dates in it! Medjool is the variety I usually see, if it is listed. A place near me sometimes has dates on their digital sale, when I have stocked up on them for $2.49 for 1 lb packs. I have vacuum sealed several for my pantry, and simply refill a qt. jar upstairs.

If you are keeping them at room temperature, be sure to check for worms. The eggs aren't apparent but since dates have moisture in them, sometimes they hatch. I saw this on a facebook group and wasn't sure I should believe it or worry about it, until one time. One time is all it takes for me, to keep them frozen one way or another.


It's not common in very very dried foods but it can happen in anything exposed to the air, like kale for instance. If the kale is dehydrated and there is a little water introduced in humidity, the worms can hatch. Often it is recommended to heat treat items that may harbor bug eggs before storing. Dried fruit is more susceptible because they are usually not dried crisp. Sorry, yukky subject.

Funny you should mention it.
Every now and then the store I go to has fresh dates.
Some are firm with a lighter yellowish/ beige color.
Then there are those that have seemed to ripen, and are soft, a little pasty, and a darker color. The first time I bought them, I thought the darker ones were overripe and spoiling, so I made an effort to just seek out the lighter ones. There must have been one softer darker one that I missed, so it came home with me. I really didnt know what to do with them, as Ive only had dried dates prior to this. I bit into the firmer one. It was ok, but nothing special. Then I decided to bite into the darker, softer one, and what a treat. It was so sweet and it practically melted in my mouth. I now wanted to figure out how to get the others to darken and soften up. I left them on the counter, and nothing. I tried drying them, nothing.

The following week I went back to the store, and now picked only the darker softer ones. I brought them home, snacked on a bunch, then decided to try dehydrating the rest. I tossed them into the dehydrator. I checked up later on, and no change, other than they were now warm. I put one of the warm dates in my mouth, and it was even better than at room temp. So, not when they are available, I only get the darker ones. I come home aand put them in the dehydrator to warm up, then snack on them as a dessert.

I actually took this pic yesterday when I was at the store, with the intenion to start a thread asking how I can further ripen the lighter ones to get darker and soft. If anyone has any knowledge, let me know. Maybe I just haven't been patient enough letting them ripen on the counter.

***I placed one of the darker , softer, riper ones on top of all the other lighter, firmer ones for contrast so you can visually understand what Im talking about. They were not individually loose. All were attached to the same stalk/stem... so its not like the darker one went through a different process. It just seemed to ripen quicker than its adjacent brothers and sisters***

LOL... Larry, after reading blissful's post, I read your post with baited breath! Just waiting for your delectable description of that super sweet bite, ..... filled with the worms.

dragnlaw said:
LOL... Larry, after reading blissful's post, I read your post with baited breath! Just waiting for your delectable description of that super sweet bite, ..... filled with the worms.

Luckily I haven't, noticeably, had the pleasure of a mouth full of worms. At least not with dates anyway. I think my worst insect in food experience was the time my wife made a salad, fresh from the garden, for when I got home from work. I put dressing on it, and as I was about to put aa fork full In my mouth, I saw a slug making its way up the side of the bowl. I now dont trust her to wash the lettuce anymore.

(Have had a mouth full of aphids on broccoli. That was a real treat. Im sill paranoid everything I buy./ eat broccoli, and that happened like 5 years ago.

(Have had a mouth full of aphids on broccoli. That was a real treat. Im sill paranoid everything I buy./ eat broccoli, and that happened like 5 years ago.
Click to expand...

My mother always soaked cauliflower and broccoli in salty water before using it. She swore that it made any bugs come out from their hiding places.

taxlady said:
My mother always soaked cauliflower and broccoli in salty water before using it. She swore that it made any bugs come out from their hiding places.
Click to expand...

I think my dad did the same thing. MY bite was right out of the garden. Definitely wasnt expecting it. Now im a little more observant

I don't think you have to worry about a mouthful of worms. The ones I found were stored at a cool room temperature, sealed from the store. They leave the dates and crawl inside the packages, 1/3rd inch long, pretty obvious. I look over the dates pretty good before using them. Also check to see the best by date, to make sure they haven't been sitting on the shelf for a long time.

I bought 3 packages the other day, looked over the packages, clear plastic, no worms. If you buy machine pitted dates, it's important to look them over, squeeze them and make sure the pits are out anyways.
S

Anyone know what these dates are? I noticed them in the produce section today, listed as 'winter dates'. I supposed it must be winter somewhere, it's definitely not winter here! 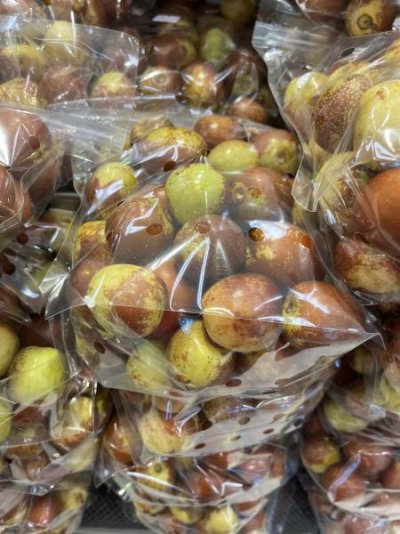 You must log in or register to reply here.

My Favorite way to Eat Stonefruits
2