Soup Season, anyone got any upcoming soup plans?

CharlieD said:
My wife been asking me to make potato soup for a while. Can you share your version, please
Click to expand...

Since its something I make off the top of my head, I wanted to wait until I was making it, so I could jot things down with more specifics. Its on the stove now. Once its done ( and assuming it tastes good) Ill post the recipe. Out of curiosity, I found my old Ratners Cookbook that I got from my dad, and compared the recipe with theirs ( since mine is a knock off of what I remembered there's tasted like) and it is very similar. Ill post both a little later .

CharlieD said:
My wife been asking me to make potato soup for a while. Can you share your version, please
Click to expand...

I paid attention to what I was doing ( and took pics) so I could give you a general idea of how I make my take of Ratners Potato soup. I had it years ago at the Ratners Restaurant in NYC. For awhile they sold it in the frozen section. It believe it is now a thing of the past. I happen to have a very old copy of the Ratners cookbook, which I dug up just to see how my recipe compares to there's. They are similar.

1 Onion Diced
2 Carrots Rustic Cut ( I like big chunky irregular pieces, cut as you like)
2 Stalks Celery Rustic Cut ( I just cut from the end with the leaves until about 2 stalks)
1 -2 Tbs Olive oil ( Enough to sweat the above)
1 (+/-) tsp Salt

- Heat up the oil medium high
- Add veggies, sprinkle some salt on them, and sweat til onions translucent . Don't brown

- After about 5 minutes , add the following :

1/2 Cup String Beans cut to about 1 inch pieces
1/4 Cup Frozen Peas
2 Sliced Mushrooms
1 Tomato Rough Chopped
A few Green Pepper Pieces ( I just like the flavor of pepper, so I pick them out when the soup is done . )
1/4 Cup Barley
7 Cups Broth ( I use a fake chicken broth for vegetarian/ vegan purposes)
3 Potatoes peeled, and cut into 3/4 Inch Cubes ( about 4 cups, I used Yukon Gold )

- Bring to a boil, then reduce to simmer, partially covered.
- Stirring occasionally.
- It took mine about 1 hour before Barley and Potatoes were done.
- Only real way to know is by tasting.

**You don't want the potatoes to break down to the point where they lose their shape and over thicken the soup, so don't have heat too high, and start checking after about 1/2 hour**
**I used frozen string beans, if using fresh, include them in the first step with the carrots, onions and celery)***
**I used a few smaller tomatoes. It's what I had. If you look closely, you'll see I forgot to remove the stem on one of them (towards bottom of pic). I found out the hard way.**
**I like the flavor of peppers, but not biting into one, so I put a few big pieces in, then fish them out at the end. If you like them, I'd dice them and sweat with other veggies in first step. **
** I originally put 6 cups of broth, then I realized it was too little and added that additional 1 cup. That is why in the pics, you may notice more liquid towards the end.**
**Sometimes what I do is actually microwave the cubed potatoes and add at the end so I can control their consistency, so they don't break down too much. I didn't today and it worked out perfectly.**

- Mix oil and flour together so no lumps
- Bring pot to boil again
- Slowly add the oil/ flour mixture while stirring until soup thickens to desired consistency.
- If it thickens enough before using all of the oil/flour mixture, then don't add all of it.
- Reduce to a simmer
- After a few minutes, add milk and stir it in
- Add Chopped Dill, and stir it in
- Taste and adjust salt/ pepper

**This is the basic recipe. It's possible I may have forgot to write things down, so use your judgment if something doesnt seem right, or ask and I'll try to clarify.**
** Thickens is your preference. If you like it thicker, add more flour/ oil mixture. If you don't like its too thick, then don't add all oof it. Ive also added some powdered potatoes to thicken it up a bit in the past**
** For vegan purposes I used oat milk. In the good old days, I would have used heavy cream (which also would have thickened it a bit)**
**I love dill ( my wife doesnt) so I held back. I personally would have added more.**
**I also love black pepper, so I personally put a lot in, but again, had to hold back due to the Mrs. preferences.**
**Best to be eaten right after making. The potatoes could break down a bit when reheated. The soup will also likely thicken over night, so may have to add a little broth second day to get desired consistency.**
**I find that any soup with beans or grains (barley in this case) in them has a shorter shelf life ( a few days), so keep that in mind.**
**Doesn't freeze well due to the consistency of frozen then reheated potatoes ( and if adding cream, cream usually doesn't freeze/ reheat well either).**

Great instructions and perfect pics to go with! Thanks Larry.

dragnlaw said:
Great instructions and perfect pics to go with! Thanks Larry.
Click to expand...

Im a very visual person, so I need it to make sense to me visually.
Im usually a fly by the seat of my pants cook, only following recipes the first time. After that, I turn into a ' little bit oof this and a little bit of that' kind of a cook.
I purposely put the potatoes in the measuring cup so I knew exactly how much I added rather than saying 3 potatoes. I also added the broth with exact measurements instead of just filling the pot to what looked right ( Which is what tI normally would have done) . My initial guess was 6 cups, turned out to be 7. Now I know.

But when I know someone else is relying on my instructions, I need to document things as I go along. Its a good thing cause eventually Id like too make a cook book for my kids o pass down family recipes and other recipes from when they lived at home. I did a little bit of that with my daughter when she moved. She basically watched over my shoulder while I was cooking some of her favorite recipes, and got everything down in writing.

Ill do that later today!

Like you, I'm a visual sort. Think I've said this is before, I tell people I'm from Missouri... yuh gotta show me.

larry_stewart said:
I paid attention to what I was doing ....
Click to expand...

Thank you so very much. Pictures definitely helpful. Really appreciate

Hope it works out. Even though I wrote things down as I did it, Id still use some cooking common sense when making it. May need a tweak here or there .

It's back to soup season, with the cold coming, more than 10° below average temps! So I baked some bread, and cooked some soup today.

I made some mushroom barley soup today, with some dried fresh beans (red and green), soaked before cooking, and about 3/4 c red lentils, cooked at the end, to thicken it, plus the nutrition, of course. It has 1 lb button mushrooms, plus 3/4 oz dried boletus - the reason the soup is so dark. The boletus is cooked with the liquid and 3/4 c barley, after cooking the seasonings in olive oil. Cooked mushrooms and red lentils are added, and cooked last. 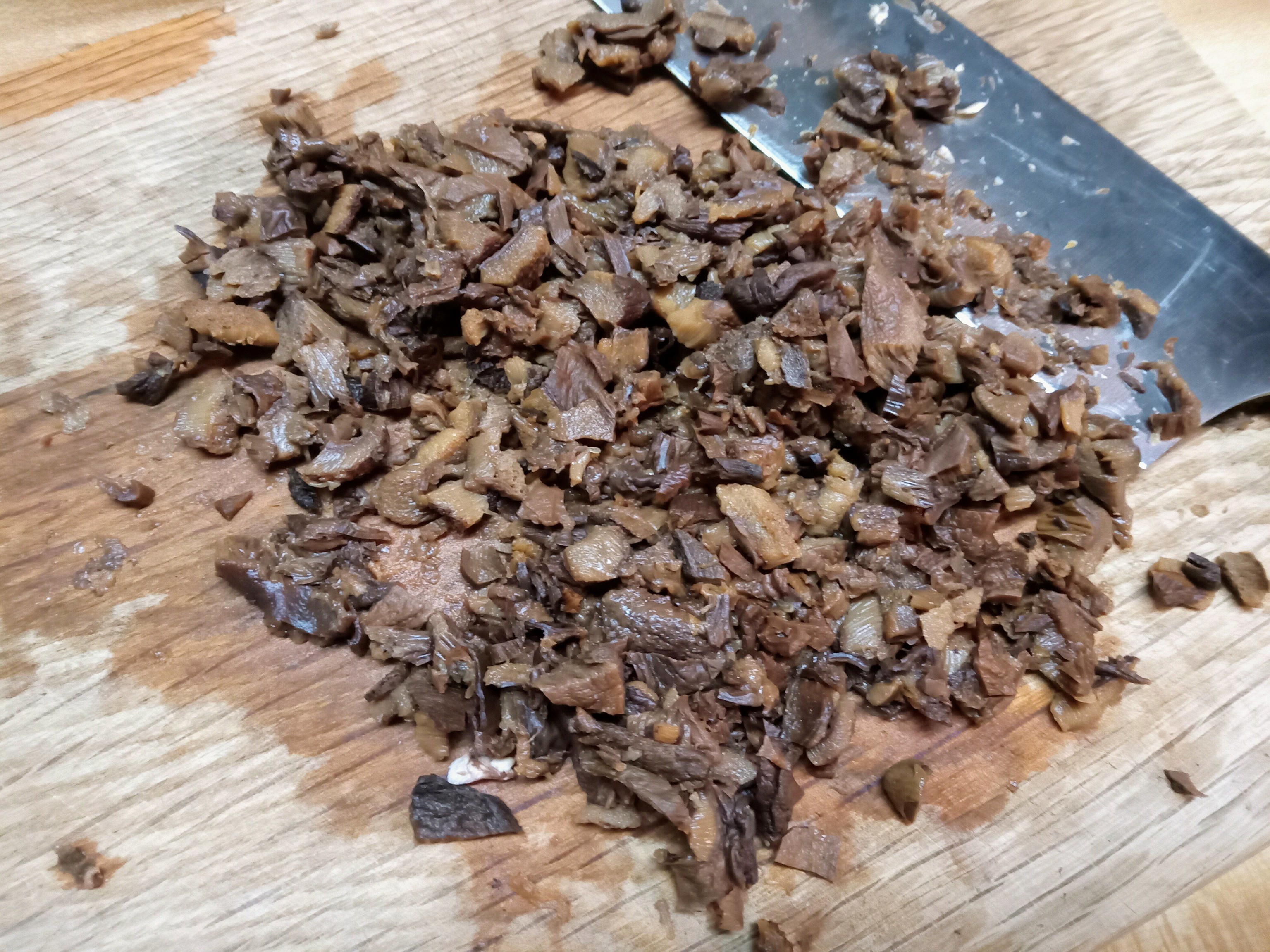 Soaked, cleaned, and chopped dried boletus mushrooms, for the soup. by pepperhead212, on Flickr 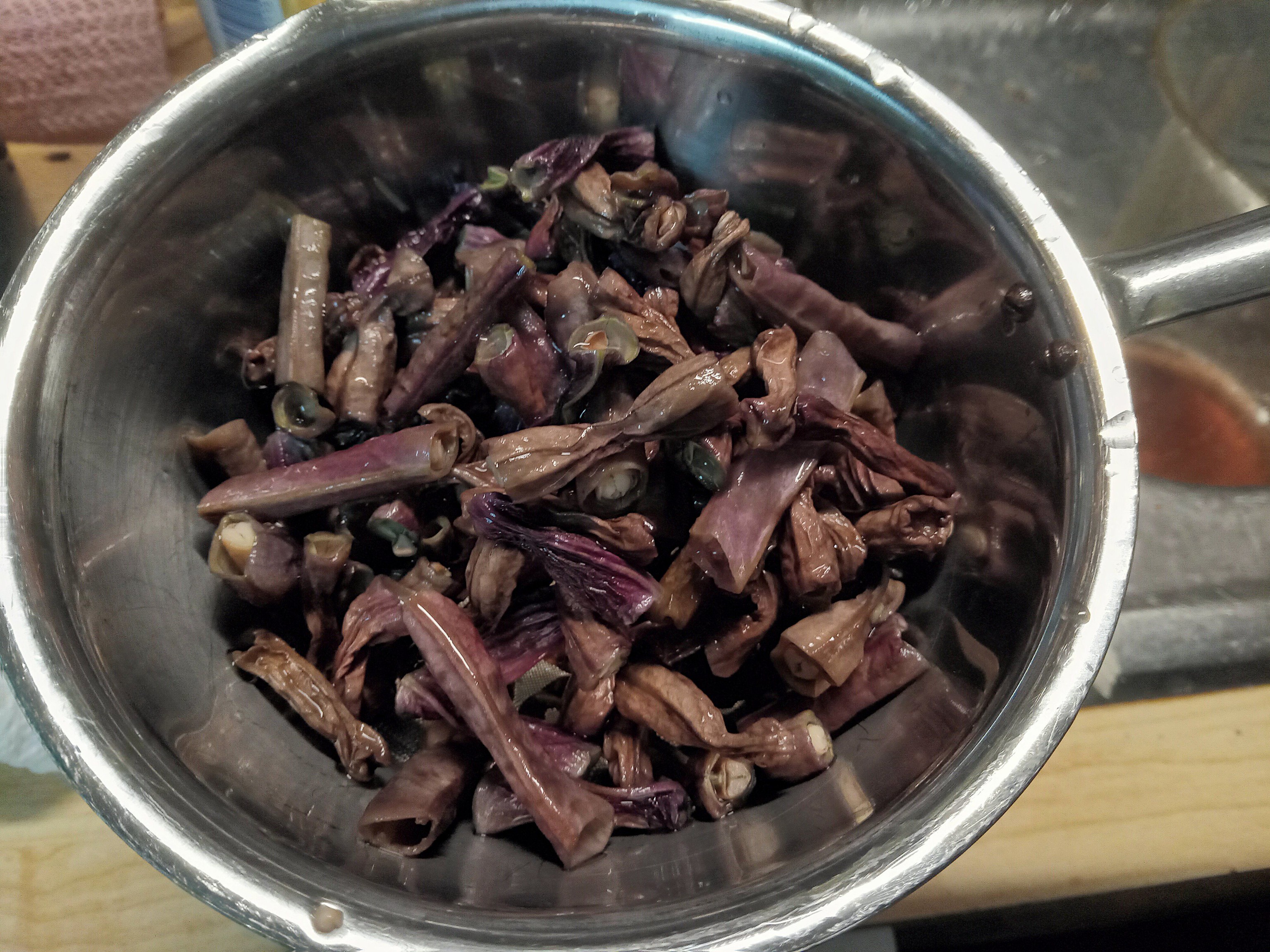 4 oz dried Thai red beans, soaked, for the soup. by pepperhead212, on Flickr 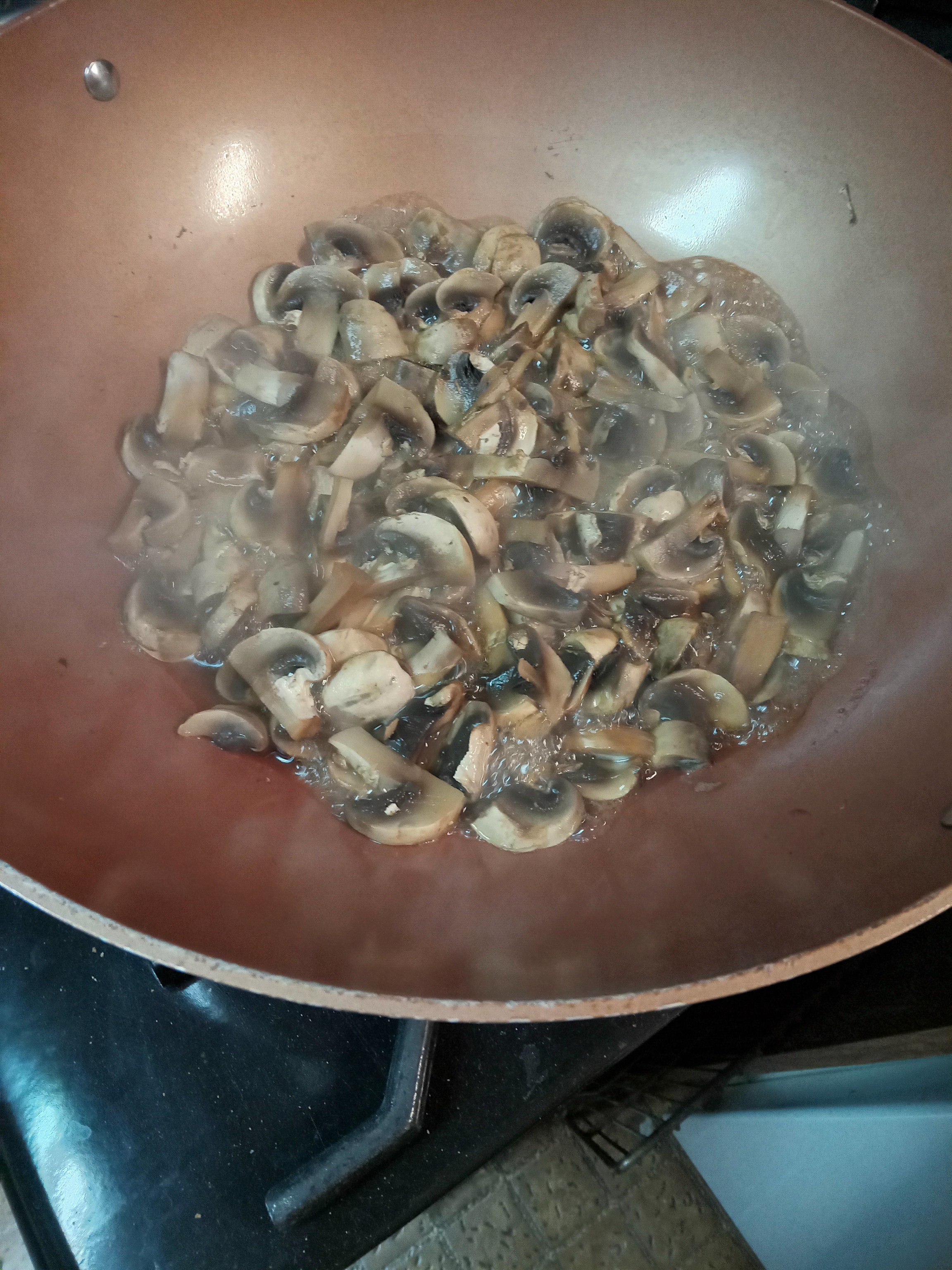 1 lb button mushrooms, steamed, then browned in a small amount of oil. by pepperhead212, on Flickr 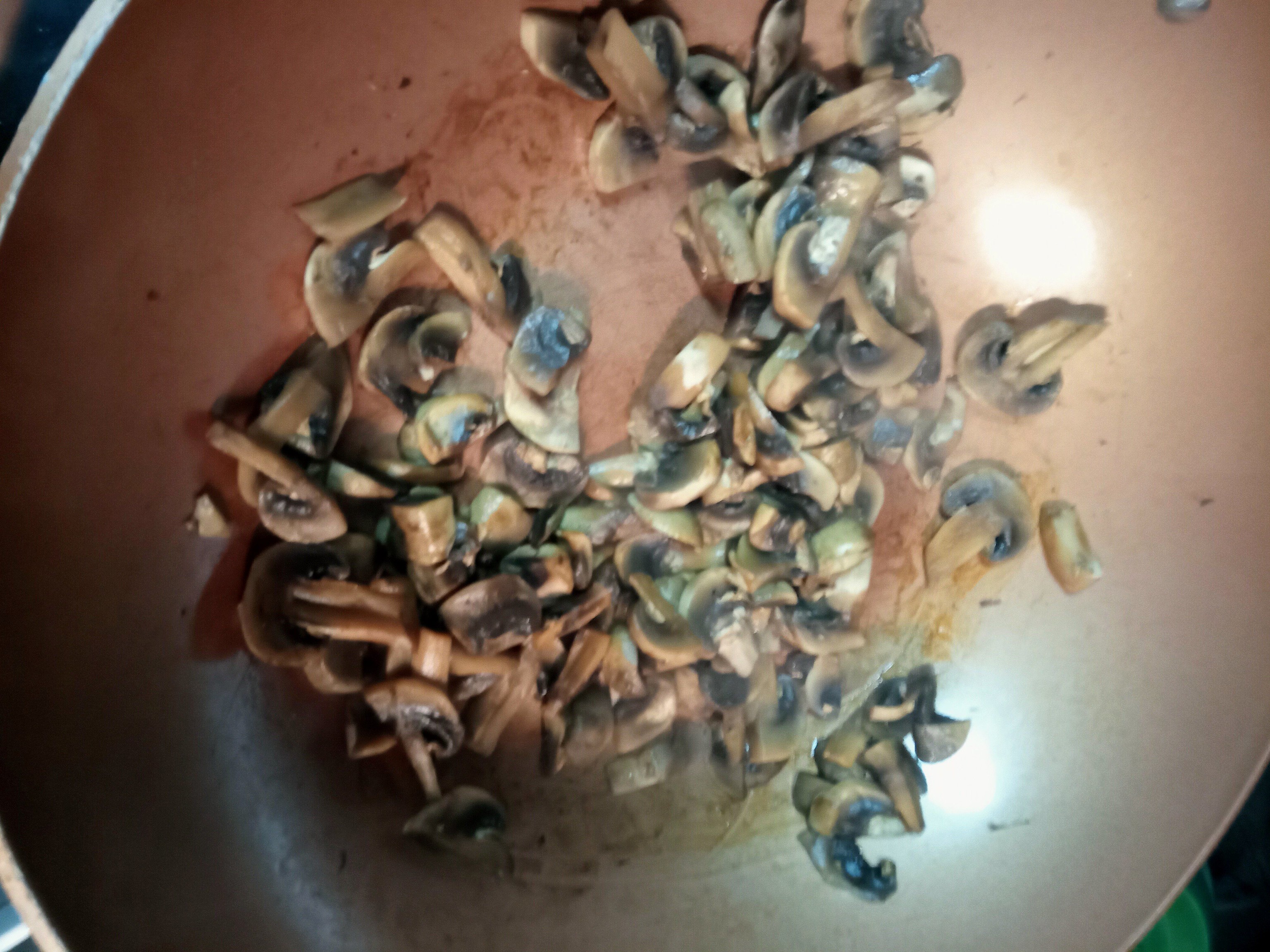 Steamed mushrooms, sauteed, then ready to into the soup. by pepperhead212, on Flickr 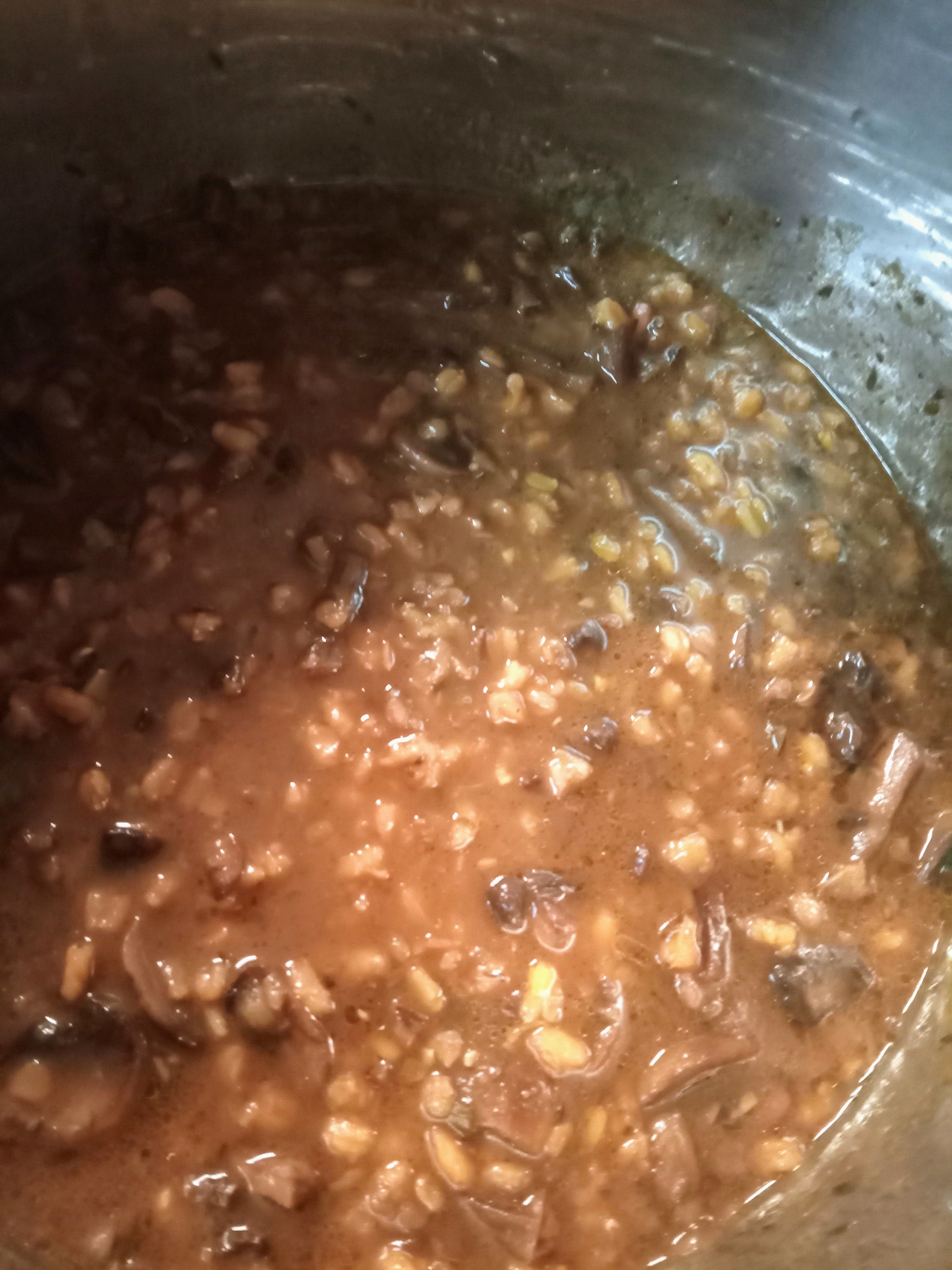 Mushroom barley soup, served with a little reggiano cheese. by pepperhead212, on Flickr

I don't usually make soup (our weather just doesn't call for it often). But I had a cup of soup yesterday in a restuarant that was wonderful! It was tomaot and gargonzola, but ther ewas something else. It had a sweetness that I've never had in a combination like that - I don't think it was just added sugar. I have to try to replicate it.
You must log in or register to reply here.