I didn't have great luck with those plants I started from seeds - they just sat there, after getting to 3-4 inches, and eventually gave up.

I went on YouTube and tried some cuttings shortly after that, but got nothing. I had to trim that plant, as it was just getting too large! So I went on YouTube again, and looked at a bunch of them, and not all were touting using the very thick, so called hardwood cuttings - some called for cuttings farther up on the stem, most saying "still flexible", but not too soft, so about the diameter of a pencil, and some used a little smaller. And a couple started them like I do with lemongrass - just stick them in water! Most called for rooting hormone, but a couple, again, just used turmeric powder. So I cut 3 long stems, and used the different thicknesses, including a couple tops, leaving just a few small leaves - something one person did. So overall, I have 9 cuttings - 2 in water, 3 in turmeric, and 4 in root-tone. Here are the ones in the soil mix. The ones in water are one thick, and one thin one. 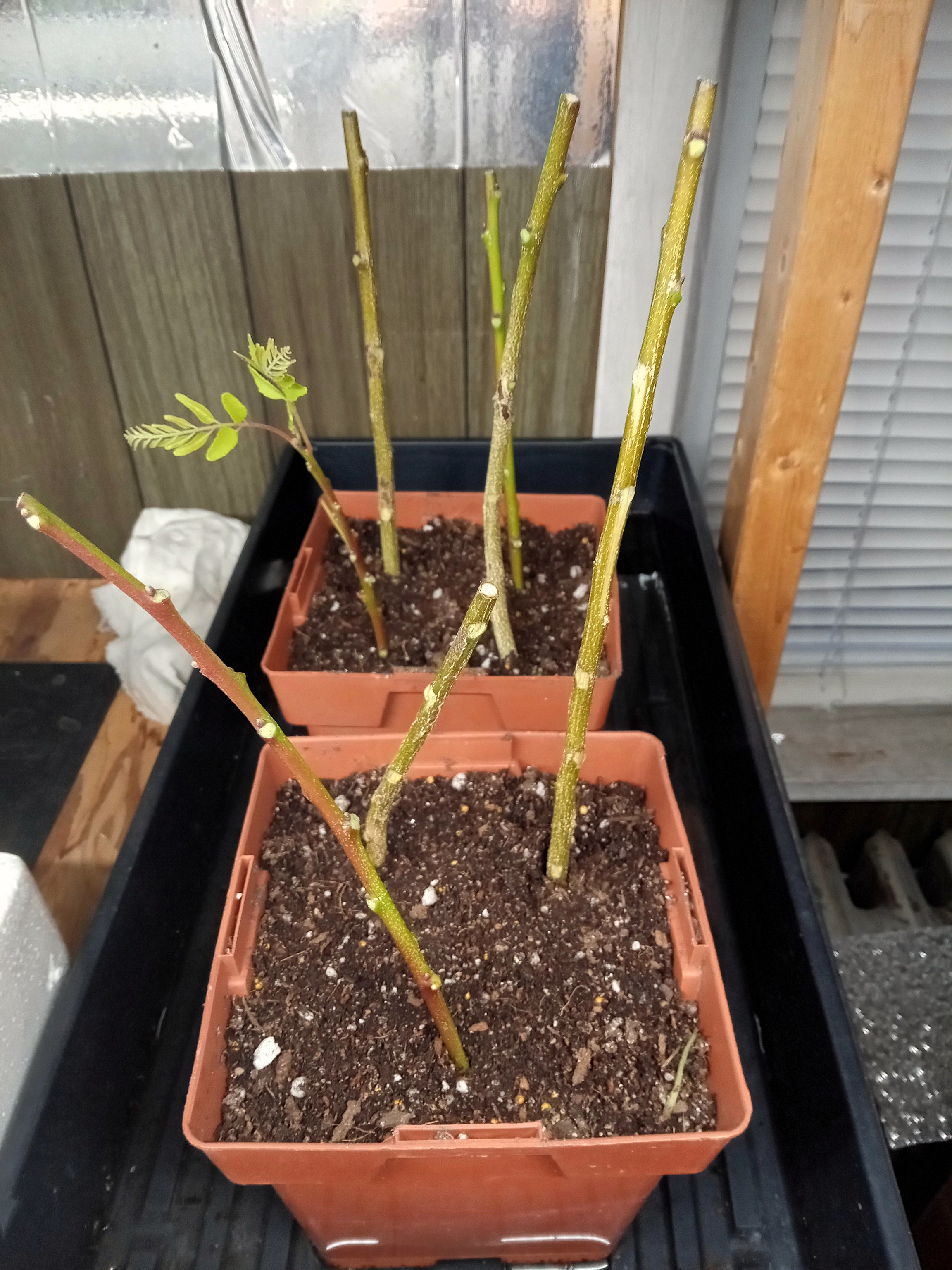 Starting (hopefully) curry tree cuttings, 3 dipped in turmeric, 4 in rooting powder. 2 more in water, in kitchen. by pepperhead212, on Flickr

All those curry leaves (and I might trim more in the morning) I'll take over to the Indian market tomorrow. Haven't been there in a long time, and he'll know what I have!

Good luck and keep us posted.
I had moderate success with seeds and cuttings, but the biggest surprised for me was when. gcut the mother tree down to aa 1 foot stump, and it totally came back leafier and bushier.

These cutting did not root at all again! The ones in water - with some HORMEX added, and changed every 3 days - also did nothing. If I really want another one again, I'll have to go to air-layering, which worked one time.

I'll see what I can come up with. I need to prune mine a bit.
May as well try to root some for fun.
We normally just remove the spontaneous growing ones underneath the tree.
My tree just started flowering

The few I grew from seed looks healthy, but had minimal growth this summer outside.

That's strange that they didn't grow outside - that's where mine has always done best. But then, those ones I started from seed I never even got outside.

pepperhead212 said:
That's strange that they didn't grow outside - that's where mine has always done best. But then, those ones I started from seed I never even got outside.
Click to expand...

I thought the same. I was banking on them growing significantly during the summer and establishing a good root system. They look healthy, but just small. The ' mother ' tree really showed tremendous growth after cutting it back to basically a 1 foot stick.

We had a mist house in Agriculture school. FFA. It misted like it does in the produce section at the grocery store. We put cuttings in pure vermiculite. No soil.
It was in S. Florida so we did not need to worry about temperature.
We always used powdered rooting hormone. Always. 90% of every cutting we used rooted.
I understand and have the same problem rooting cuttings here in SC. I have had some luck with water rooting and soil rooting. But not nearly as successful as we were when we had professional nursery equipment like back in school.
We always left more leaves on the cutting. Not a lot of leaves, but a few.
You must log in or register to reply here.

Bringing in the curry tree first, 10-8

Syrian Oregano and Marjoram, last harvests of the season.

U
If you want to live great try this curry

My Meyer Lemon Tree got itself another year.