What is your favorite soup?

The friendliest place on the web for anyone that enjoys cooking.
If you have answers, please help by responding to the unanswered posts.
See posts with no answers
G

for now mine is chicken noodle since I successfully made some and it tasted real good which isn't always the case with my cooking but I am learning. They say it is never to late to learn and I am retired and believe that cliche. So what is your favorite soup and why. Because its easy to make? Or it tastes good? Or both maybe.
M

I love to make and eat minestrone. It takes a while, since I start with roasting beef bones to make my own broth. I make a really large pot of it, and have several containers to freeze. It's not particularly easy to make, but it does taste good!

Soup is one of my favorite things to eat! I cannot isolate one I love over all the others. A lot depends on what I'm in the mood for.

Soups are a major reason I look forward to colder weather.

Some of my very favorite soups in no particular order:

I can't pick just one favorite. I love soups. Greek Lemon Spinach soup, Habitant soup, Asparagus soup, tortilla soup, a hot sour soup. None of them are particularly hard to make and I like variety. After soup with bread I'm satisfied.

I too love soups, both hot and cold. I've written a whole cookbook of nothing but soups, stews, and chowders.

Tomato based Soups
And then there are:
And we still have many more categories I haven't touched on.

All the soups I listed, I have made over the years, and would share the recipes for any and all of them.

But don't be overwhelmed by my list. Just use as a reference, and decide which sound appealing to you.

Bliss, what is Habitant soup?

taxlady said:
Bliss, what is Habitant soup?
Click to expand...

We never called any soup habitant soup, until I came here and people talked about it. It's split pea soup. I just made some the day before yesterday. I love the stuff.
I can it also.
https://ucanr.edu/sites/mfp_of_cs/files/341899.pdf
I put potatoes in instead of ham. Ham tends to be hard on the kidneys with meat protein and salt.
Last edited: Jun 11, 2022

blissful said:
We never called any soup habitant soup, until I came here and people talked about it. It's split pea soup. I just made some the day before yesterday. I love the stuff.
I can it also.
https://ucanr.edu/sites/mfp_of_cs/files/341899.pdf
I put potatoes in instead of ham. Ham tends to be hard on the kidneys with meat protein and salt.
Click to expand...

This is interesting. I always knew Habitant as a brand name primarily for yellow pea soup. 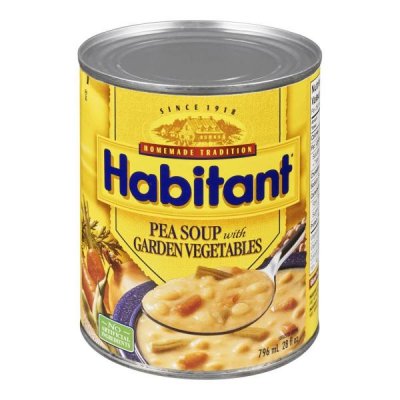 I guess the question now is: Which came first, the brand name version of the soup or the soup recipe that the brand adopted and made popular.

Andy, I have never seen habitant soup in the store, nor was it talked about that made me think of yellow split peas. Thank you.

I've been known to order soup for dessert when out in a restaurant ( assuming I liked it as an appetizer ).

Favorite soup from a restaurant (used to be) Vegetarian Hot and Sour soup. Sadly, all the restaurants that made it well, went out of business.

Oh, I forgot one of my favorite categories, legume soups.

I'm thinking that just about anything can be made into great soups, except maybe beads. pastries, and such. Even there tough you can serve thicker soups in bread bowls, of puff pastry cups.

I wonder: if you took fresh, sweet watermelon, with some of the white part of the rind, blended it up until smooth, would that be a cold desert soup?

Chief--the white part of the rind of watermelon dehydrates well.....also, it cooks up a lot like cucumber and would be good in soups or stews.

blissful said:
We never called any soup habitant soup, until I came here and people talked about it. It's split pea soup. I just made some the day before yesterday. I love the stuff.
I can it also.
https://ucanr.edu/sites/mfp_of_cs/files/341899.pdf
I put potatoes in instead of ham. Ham tends to be hard on the kidneys with meat protein and salt.
Click to expand...


Andy M. said:
This is interesting. I always knew Habitant as a brand name primarily for yellow pea soup.


I guess the question now is: Which came first, the brand name version of the soup or the soup recipe that the brand adopted and made popular.
Click to expand...

I'm pretty sure the recipe came first. Lots of people still make French Canadian style pea soup at home. That style of soup is popular in Quebec and has been since before the Habitant company.

Too many to count and, as someone already mentioned, depends on my mood and the time of the year.

I LOVE soup and I guess if it was push comes to shove, it would have to be my own created potato soup. My youngest brother who is no longer with us would darned nearly crawl over broken glass for a bowl of it.

I have a lot of favorite soups. While I could eat it almost every night for supper during cool/cold weather, Himself tires of it. However, if I say "I'll make creamy chicken and rice" he'll always agree to it. Here's the link to his favorite soup: Cooking Goddess's Creamy Chicken and Wild Rice Soup

My favorite soup is cream of crab, though I am also partial to any seafood bisque (well, at least the ones I have had).

I am not a huge soup eater though, it is nice on occasion, especially as a starter but rarely do I think soup needs to be the meal.

I did make a wicked good deer rib, mushroom and barely soup once.

I think my #1 favorite soup would be Albondigas. At least for now!? I enjoy making it with plenty of veggies. Many restaurants don't put enough veggies in it for me. I like to include jalapenos for a little added warmth. I make enough so that there are a few quarts to go in the freezer too. I use turkey for the meatballs, so there's an added benefit of a good night's sleep after a bowl for dinner!

I do make soups occasionally but not a big eater of it. Either a really small starter or the whole pot for a meal with a loaf of bread.

The only "water" soup I make is WonTon, other than that it will be a cream soup. Barley, Potato, Chowder. I like and make Cream of a vegie - Broccoli, Cauliflower, etc.

I make a group of soups that I call essence soups. These are broth soups, with almost no solids. Examples would be consome', fume's, çhicken broth, mushroom broth, and many others.

My first experience with this kind of soup was in the Phillipines, at a resort, where they had this soup made with tiny clambs, smaller than a fingernail. The broth had a rich clam flavor and really wetted the appetite. That's what my essence soups are, appetizers that prepare you for what's to be served, without fulling you up. Try an essence soup as an appetizer to your next meal, be it family, or a get together with friends. Just make sure the soup compliments the meal.

My mother almost always served a consomme as a course with her dinner occasions. I think she probably used Campbell's Beef Consomme, it was popular back then. It was also served during family dinners, it was one of my dad's favourites.

The small'ish' bowls with 2 handles, almost like miniature chowder bowls, were used and known as Consomme Bowls. Usually most dinner sets had them. Served on small plates, aka salad plates, (on top of the dinner plate?), for easy removal.
Family dinners did not use the C Bowls, lol.
You must log in or register to reply here.

Soup Season, anyone got any upcoming soup plans?
4 5 6

What are you having for supper Saturday, 2022 December 3?